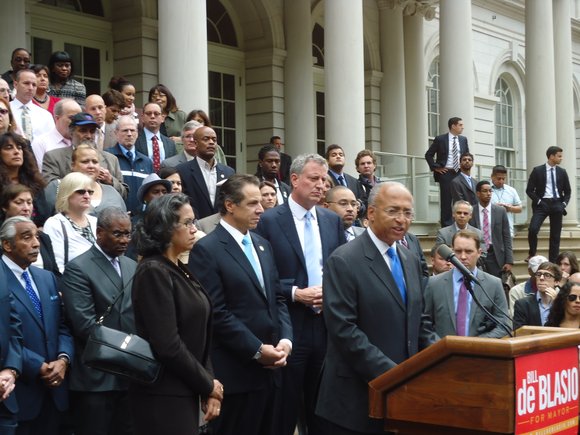 Thompson previously said that he wanted all of the votes counted before he made a decision about weather or not to peruse a runoff against de Blasio.

At a press conference Monday at City Hall, Thompson was joined by de Blasio and Gov. Andrew Cuomo in solidarity for the Democratic Party to win the November general election.

While many news outlets reported that Bill Thompson was holding out for a final ballot count from Tuesday’s New York City mayoral Primary, he announced today that he would not be perusing a runoff with primary winner and would be deferring to Bill de Blasio.

Thompson initially told reporters on Wednesday, “It is an obligation to the people, to the public, to make sure every vote is counted until someone gets to 40%.”

In Tuesday’s primary Thompson received 26.2% of the votes, squarely putting him in second place behind de Blasio’s 40.3% and Christine Quinn’s 15.5%. A candidate who wins 40% or more of the primary vote from their party goes straight to the Mayoral elections, however with the city using the old ballot machines and paper ballots still being counted, it may take as until next Thursday to count every single vote. Those extra votes could be the difference between de Blasio holding on to the 0.3% that puts him above the 40% mark and candidates could request a recount if the percentages are very close.

This was Thompson’s second bid for mayor, as he also ran unsuccessfully in 2009. Before that, from 2002 to 2009, Thompson served as NYC Public advocate.

In this mayoral election exit polls showed that Thompson, the only Black candidate, tied with de Blasio, who has campaigned with his mixed children, for the Black vote with both receiving 42%. 49% of Black men voted for Thompson.

While two thirds of voters in the primaries were over 45-years-old, Thompson came in with 30% of the votes from those aged 45 to 64.

With stop and frisk being a hot button issue this election, voters who said crime was the most important issue in the city were split 35% and 34% between Thompson and de Blasio respectively. However 53% of voters who though stop and frisk is “Excessive and results in innocent people being harassed,” voted for de Blasio, compared to 23% for thompson.

Finally 33% of people who had a member of their household who was a member of a labor union voted for Thompson, compared to 38% of union households voting for de Blasio.

While there has been no word from the many unions that initially backed Thompson, in the wake of Tuesdays primary 32BJ, RWDSU and the Hotel Trades council, all of which formerly backed Christine Quinn’s mayoral bid, said they would now be backing de Blasio.

These large endorsements will help to raise the money needed to continue campaigning. According to the N.Y.C. Campaign Finance Board numbers earlier this month, Thompson spent 4.75 million dollars on his primary bid compared to de Blasio spending 5.45 million, the most of any candidate.