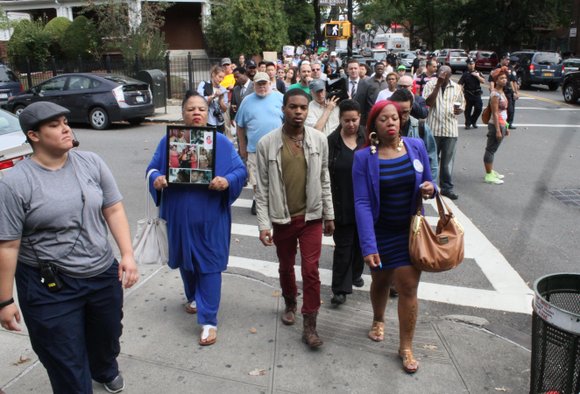 According to her family, it was the purely insensitive mindset of the NYPD that may have caused the death of 37-year-old Kyam Livingston in a Brooklyn Central Booking cell on July 21.

Anita Neal mourned for her daughter, who was arrested on July 20.

“I need justice for my daugher,” the weeping Neal exclaimed, as her uncontrollable emotion punctuated an eerie of silence at a rally and march at the intersection of Church Avenue and 18th street on Saturday. Passerbys stared and motorists looked through their windows to see what was happening. “I will not give up. We need the names of the officers who were involved,” she said. 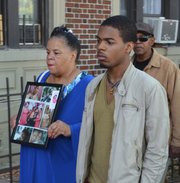 The gut-wrenching, blood-curdling wail of a mother, a sign of the effects of death and pain, pierced the core of every human soul and filled the air around the courthouse at 120 Schermerhorn St., as family, friends and clergy held a vigil on Aug. 22, and again in the Flatbush community on Saturday afternoon, to mark the one- and two-month anniversaries of Livingston’s death. Her enraged family members are demanding answers about her death from Police Commissioner Ray Kelly and Brooklyn District Attorney Charles Hynes.

Livingston was arrested for violating an order of protection granted to her 78-year-old grandmother, Theresa Johnson. Johnson said that her granddaughter lived with her in Windsor Terrace and had been drinking when she turned violent and began breaking furniture. Johnson called the cops. Livingston was taken into custody, processed and taken to Central Booking. But no charges were filed against her. While there, Livingston became ill with stomach pains, diarrhea and eventual convulsions over a seven-hour period. Reportedly, cell mates pleaded for hours with the NYPD for someone to come to her aid. Aleah Holland, an inmate who was in a cell with Livingston, told the Daily News that Livingston was crying about stomach pains and diarrhea and asked the officers for hours to allow her to get medical attention.“They said, ‘Shut up before we lose your paperwork and you won’t be seen by a judge,” Holland said.

The victim was reportedly dead for 20 minutes before the medical personnel arrived the morning of July 21. However, NYPD officials claimed that Livingston was pronounced dead at Brooklyn Hospital Center.

Livingston was working as a security guard at Elite Investigations, an investigative security and protection agency, according to an identification card her mother had at the rally.

As family members continue to demand answers, Livingston’s 21-year-old son, Alex Livingston, says he had a “friendship relationship” with his mother, and has no choice other than to be strong for his family.

“I’m the only one that is stable. I’m just trying to control myself emotionally and keep it together for everyone, including myself,” he said. “I know there will be justice. We will do everything that is needed to make it happen.”

Livingston’s family has now launched a petition calling for: 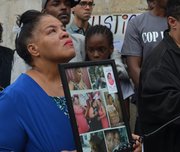 At the protests for these demands on Sunday, more than 100 Brooklyn residents from Black and Latino communities, grassroots and civil rights organization leaders, elected officials and Livingston’s family members chanted, “We need justice for Kyam Livingston, ignored and killed at the booking cell!”

Many families at the vigil said that they too were victims of NYPD insensitivity, having lost sons and daughters. They vowed to keep protesting until a change comes. They identified with Neal, who said, “I am doing it for you, Kyam. I want to make sure whoever did it to you pays. The persons who did this should come forward. What are you there for if you can’t help someone in pain? What did she do? She was in pain, she asked for help.

“Nobody will rest until I get justice for Kyam. My daughter will not die for nothing. … Sorry I wasn’t there, Kyam. I would have helped you … I love you, Kyam.”

Family attorney Elliot H. Taub and criminal defense attorney Jay Schwitzman talked about the abhorrent conditions in Central Booking. Schwitzman, who worked with clients in the building for 25 years, was appalled at the labels that are being used to describe their deceased client. She is accused of being an alcoholic and one who suffered from seizures, which the family vehemently denies.

Schwitzman said that arrestees at Central Booking are held like cattle in a large cell under some of the most inhumane conditions. There are 20 to 30 people with a range of charges in one cell, with an open, dirty toilet. Floors are dirty, and the area is infested with vermin. NYPD staff there show no compassion for the sick or anyone, he said.

The NYPD did not respond to an AmNews request for comment.

Brooklyn Councilman Mathieu Eugene expressed his disappointment about the way the situation has been handled by the NYPD and called for a thorough investigation. He told family members that he will do whatever within in jurisdiction to ensure that an investigation is done.