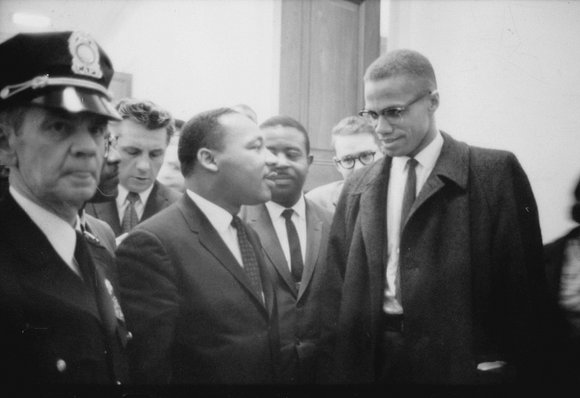 Although records indicate that two of the most influential Black U.S. leaders of our time had been aware of each other’s activism since at least 1957, Malcolm X and Martin Luther King Jr. met face-to-face only once, on March 26, 1964. It occurred at the Capitol in Washington, D.C., following a press conference for a Senate hearing regarding the 1964 Civil Rights Act.

“I’m throwing myself into the heart of the civil rights struggle,” Malcolm offered, as the two fearless leaders locked palms while the paparazzi flicked away.

King commented afterward: “He [Malcolm X] is very articulate, but I totally disagree with many of his political and philosophical views—at least insofar as I understand where he now stands.”

Just a couple of weeks earlier, on March 12, Malcolm announced his independence from the Nation of Islam, following his 90-day silencing for making his “chickens coming home to roost” remark regarding President John F. Kennedy’s assassination.

“At the end of the conference, he came and spoke to me, and I readily shook his hand,” King recalled in an April 3, 1964, letter, adding that “my position is that of kindness and reconciliation.”

Not much dialogue was exchanged during the brief encounter, although they utilized attorney Clarence Jones as a liaison to continue their unifying liberation efforts.

“The goal has always been the same, with the approaches to it as different as mine and Dr. Martin Luther King’s nonviolent marching that dramatizes the brutality and the evil of the [Caucasian] man against defenseless Blacks,” determined Malcolm. “And in the racial climate of this country today, it is anybody’s guess which of the ‘extremes’ in approach to the Black man’s problems might personally meet a fatal catastrophe first: ‘nonviolent’ Dr. King or so-called ‘violent’ me.”

Preparing to establish the Organization of Afro-American Unity, Malcolm sought to bring Black leaders together for a common cause, and despite his scathing critique of King promoting “the white man’s religion,” the courageous leaders agreed to work together.

“I saw Malcolm X speak in Selma, Ala., on Feb. 4, 1965. He was ready to join the Civil Rights Movement; he spoke at Brown’s Chapel [and] he met with Coretta King [King’s wife] and Andrew Young that day. He came to support King’s movement, but King was in jail and could not be with him,” recalled journalist Jack Newfield.

Malcolm assured Coretta King: “I want Dr. King to know that I didn’t come to Selma to make his job difficult. I really did come thinking that I could make it easier. If the [Caucasian] people realize what the alternative is, perhaps they will be more willing to hear Dr. King.”

Newfield reflected: “The week before Malcolm died, Clarence Jones had dinner with him in New York City … they agreed on an agenda where King and Malcolm would come together. They agreed to disagree on self-defense, which was still a point of difference between them. Malcolm X was going to organize the Northern cities, and King was going to continue organizing in the South … and those two guys coming together in the winter of 1965 had to be J. Edgar Hoover’s worst nightmare.”

Martin Luther King called Malcolm’s Feb. 21, 1965, execution a “great tragedy” and expressed his regret that it “occurred at a time when Malcolm X was … moving toward a greater understanding of the nonviolent movement.” He asserted that “Malcolm’s murder deprived the world of a potentially great leader.”

Martin Luther King sent a telegram to Malcolm’s widow, Betty Shabazz, expressing his sorrow over “the shocking and tragic assassination of your husband. While we did not always see eye to eye on methods to solve the race problem, I always had a deep affection for Malcolm and felt that he had a great ability to put his finger on the existence and the root of the problem. He was an eloquent spokesman for his point of view, and no one can honestly doubt that Malcolm had a great concern for the problems we face as a race.”