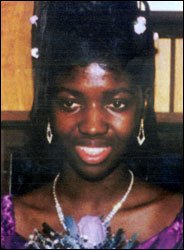 The suit filed by the mother of 21-year-old murder victim Romona Moore was thrown out of court on Monday. The college honors student was abducted, tortured and killed in Brooklyn in 2003. At the time Moore went missing, cops at Brooklyn’s 67th Precinct downplayed her mother’s cry for help, saying she was probably with a boyfriend.

Moore’s mother, Elle Carmichael, argues the NYPD used a double standard by not looking for her daughter while aggressively pursuing the disappearance of a white woman. She made reference to a massive police search for Svetlana Aronov, the wife of a doctor who was found dead in the East River a month before her daughter’s murder.

Federal Judge Nina Gershon ruled there was no evidence that NYPD did not look for Moore, because she was Black. She wrote, “Although a jury could well find that there was different treatment of the [Moore and Aronov] cases, and even assuming that this differential treatment could be taken as racially motivated, it is well established that even so tragic a case as Ms. Moore cannot itself show a practice so persistent and widespread as to constitute the existence of a widespread, persistent practice.”

Former councilman and longtime activist, Charles Barron, supported the family during their two-month court ordeal, when the men responsible were sentenced to life behind bars. He believes that if the police had searched for Moore as intensely as they did for Aronov, Moore would still be alive today.

“I remember when it first happened. This woman (Aronov) was missing around the same time as Moore,” Barron told the AmNews. “There were press conferences, posters and door-to-door canvassing, but nothing for Moore.”

He added that it is ironic that the same judge who made a landmark decision to allow the civil law suit would later dismiss this case. “This is something that should be investigated, this is absurd,” said Barron. “This is the second attack on Romona Moore. The first attack was by her killers, and now the judicial system. This is racist and outrageous.”