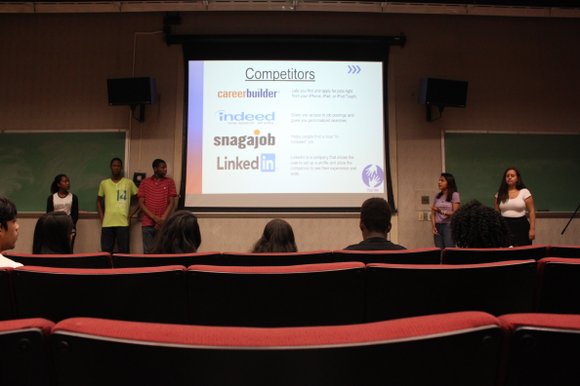 Silicon Harlem has been making big moves since hitting the scene in 2013. But perhaps none of the company’s myriad projects is quite as impressive as their Apps Youth Leadership Academy or AYLA, which is bringing teens together to build mobile apps in partnership with the Caribbean Culture Center African Diaspora Institute (CCCADI).

AYLA, which has been running since July 7th, is the brainchild of Silicon Harlem’s co-founders/executive producers Bruce Lincoln and Clayton Banks and members of CCCADI, who first came together working on a series of augmented reality programs, where they showed Harlemites of all ages how to incorporate multimedia into learning about landmarks and artworks in East Harlem. From this partnership, inspiration for AYLA grew.

Clayton Banks and Bruce Lincoln look on as students present their app projects.

“We were inspired so much by that experience, we decided that given all the new technology and new ways that jobs are being formulated, STEM [Science Technology Engineering Mathematics] became a very important part of everyone’s education,” said Lincoln. “We wanted to make sure that we created a program where we could emphasize STEM, while at the same time emphasize augmented reality, entrepreneurialism and start-up tactics.”

Twenty lucky students ages 14-17 were chosen from a large number of applicants who either live or attend school in Harlem. All are Black or Hispanic and over half of the participants are female.

“The students were basically identified through a number of different programs that coordinate STEM and computer science in the schools,” stated Lincoln. Lincoln and Banks conducted outreach during May and June before interviewing and selecting the top students.

AYLA participants gather at the City College of New York for workshop style sessions four days a week. “We have a full vetted curriculum that we work from. The idea is to give these students a more rounded way of looking at their future when it comes to business, jobs and technology,” said Banks. Each day, students participate in team building activities and lessons covering areas such as coding, business skills, wire framing and even building functional specifications and technical writing. The program is hosted at the City College of New York, aided by the school’s office of Government and Community Affairs. Tuition for the six week course is subsidized by the Harlem Community Development Corporation.

Separated into four “companies” of five students each, the teens are doing exceptional work.

“They all came up with a company brand, name logo. They came up with a mission statement and an idea for an app,” Banks said. The teen-developed mobile apps include Pair Me, a mobile job exchange; Find My Buddy, a geolocating and meeting tool; Carpe Diem, a hyperlocal social event planner; and Prep My Day, a task manager and procrastination stopper.

On Thursday August 21st, students will participate in a PitchFest and Public Recognition Ceremony at My Image Studios (MIST), the closing event of the AYLA program. At their dress rehearsal last week, the audience was very engaged and seemed impressed with the teens’ work.

“Each of them had a problem that made sense. You could tell that there was real research there, but also thinking about their daily lives and real observation of what’s happening in the world around them,” stated Shana Lassiter, Deputy to the Dean of CCNY’s Grove School of Engineering. “The kids were fantastic,” educator David Wexler said, “The concepts and their understanding of what they’re trying to do is very impressive.” City College senior Bryan Posso added, “These kids [are] starting young and thinking quick; it’s the way to go.”

Lincoln and Banks are very proud of the AYLA students and hope to go continue working with them in the coming years and grow the program. They recognize the need for STEM education outside of the classroom walls and see AYLA as just the start to the number of opportunities they can bring to Harlem youth. “It’s more than just the individual, it’s the environment that you provide for that individual,” Lincoln mentioned. About the progress they’ve made this year, he said, “No matter what they learn, we were able to bring the best out of them.”