‘Through a Lens Darkly’ debuts in NYC 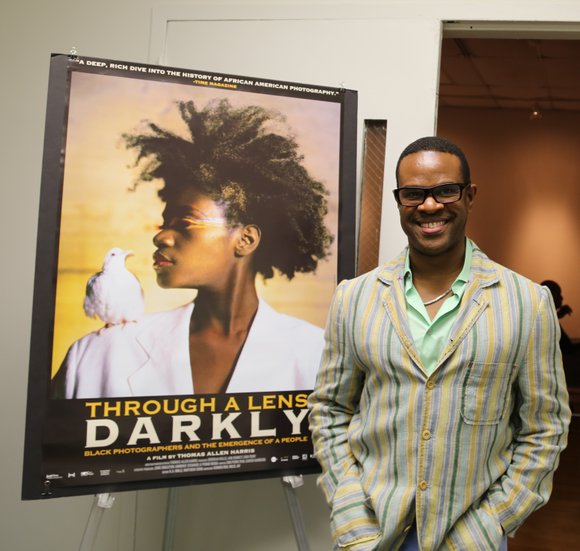 Thomas Allen Harris, director of the documentary “Through A Lens Darkly”

Thomas Allen Harris’ documentary “Through a Lens Darkly,” which begins a two-week engagement in New York City, is inspired by the book “Reflections in Black: A History of Black Photographers 1840 to the Present,” shared the film’s producer, Deborah Willis.

The documentary attempts to show how Black photographers have used the camera to define themselves, our people and our culture. In contrast, white photographers, historically, have demeaned African-Americans through racist imagery.

The film also enthusiastically embraces both historical material (e.g., African-Americans who were slaves, who fought in the Civil War, were victims of lynchings or were pivotal in the Civil Rights Movement) and vibrant contemporary images made by such powerful luminaries as Roy DeCarava, Gordon Parks and Carrie Mae Weems.

Inspiration, the word, might not be a fitting or an honest description of the film. The film is dependable. “Through a Lens Darkly” presents countless stunning photographs, which are coupled with sincere, knowledge and passionate talking heads, who describe the emergence of Black photographers and Black subjects in America since the dawn of the art in the mid-19th century.

The film is sturdy. The film is too long! The film is too short! It’s a paradox, but it’s a fascinating experience, maybe because of the sobering fact that this country chooses to show and support “negative” and “collective, soul damaging” images of our people.

Harris’ personal connection to photography and reminiscences about his family offer a much-needed perspective and a connection to the warm aspects of being wonderfully “Black.” I can almost feel the ancestors breathing over my shoulders, helping my scanning eyes absorb the stories of each subject in the photographs and then match them, if possible, to my own memories.

The most interesting part of the documentary is the treasure trove of images unearthed from countless sources that trace the emergence of not only Black subjects in photographs but especially the eye of Black photographs on their own lives and communities.

History in a photograph isn’t history, it’s now. The visual story begins, appropriately, with Jules Lion, who opened a daguerreotype studio in New Orleans in 1840, only a year after the technique had been invented. The film highlights an impressive list of amateur and professional photographers, including such luminaries as the former slave-turned-statesman Frederick Douglass, “the most photographed American of the 19th century.” Douglass was a skilled man who knew brand management and used his self-portraits to inspire and imprint.

Equally interesting is the story of the “American Negro” photographic exhibition at the 1900 Paris World Fair, which showed the prosperity and emancipation that some of the U.S. Black population were experiencing—a dark and unsettling contrast against the tyranny that most African and other colonial nations were experiencing under the false idea and policies around white superiority. White superiority is absolute rubbish and historically unsupported.

The LGBT and women photographic pioneers are also mentioned, their history being presented in fleeting glimpses, anchored with the question, “Why weren’t those images a part of ‘our’ family album?”

Harris’ lineup of talking heads—which include historians and artists offering very brief observations on the work shown—has just the right touch. Like a dash of salt, thrown from your grandmother’s hands, sans a measuring instrument.

I feel for Harris, who provides the voiceover. Perhaps his budget didn’t allow for a more “engaging” and “robust” commentator. Regardless, his flat voice is distracting and not seductive. Visually, the film delivers and picks up the slack of the “dull as drying paint” voiceover. The result is imaginative, touching and deeply insightful.

In the end, the film is a cornucopia of Americana that revels in ugly truths surrounding the history of race relations. The power of our people, to find and express joy, as shown through the photographic lens of artists and amateurs alike, is another example of our lasting impact on this world.