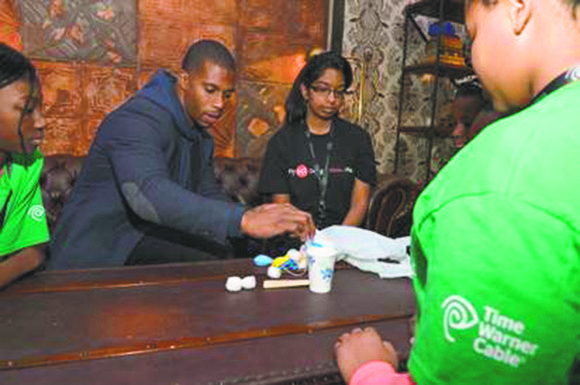 Brought to life by the New York Hall of Science in conjunction with numerous network partners, Connect a Million Minds Day attendees participated in fun, hands-on learning activities that demonstrated the STEM behind popular TV shows and networks, as well as how these subjects power the activities young people are most passionate about, such as sports, music and cooking.

“Connect a Million Minds Day helps demonstrate the science behind the things we do every day,” said Burrell. “As a chef, I know that science and math aren’t just subjects in school. They are crucial to the process of creating beautiful and delicious food.”

Both Cruz and Burrell have partnered with Time Warner Cable on Connect a Million Minds—Time Warner Cable’s five-year, $100 million cash and in-kind commitment to inspire the next generation of problem solvers, appearing in original public service announcements and at events to promote the importance of STEM to young people and their families. Connect a Million Minds was launched in conjunction with President Barack Obama’s “Educate to Innovate” campaign. The day’s events are a response to the president’s call to think about new and creative ways to engage young people in math and science.

“I encourage you to soak up today’s experiences and discover what you’re really excited about. Your math and science classes are important—work hard in them!” said Arne Duncan, U.S. secretary of education, in a welcome video to student participants. “Thank you to Time Warner Cable for putting together this incredible event and for partnering with the president on his Educate to Innovate initiative.”

Time Warner Cable’s Connect a Million Minds is a five-year, $100 million cash and in-kind philanthropic initiative to address America’s declining proficiency in STEM fields, which puts our children at risk of not competing successfully in a global economy. To learn more about Connect a Million Minds, visit www.connectamillionminds.com.