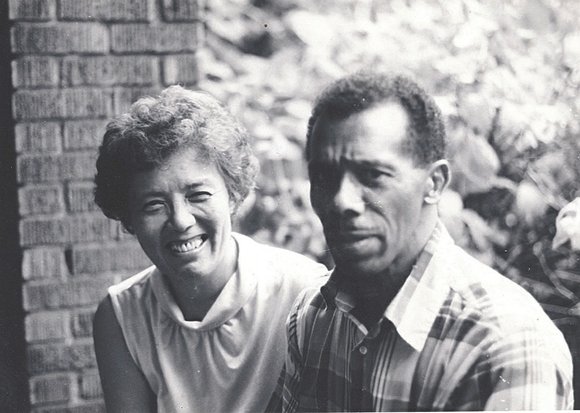 James and Grace Lee Boggs in the 1960s

There have been countless African-American thinkers and activists—men and women—unassociated with academic institutions, yet who have nonetheless made considerable scholarly contributions. Many of these individuals, such as James Boggs, are known by only a small circle of activists and should be better known for their unstinting work in the struggle for Black liberation.

Fortunately, James Boggs’ widow, Grace, is still around and eagerly dispensing information and knowledge, mainly about the work they did to further the struggle for black liberation. But “A James Boggs Reader”, compiled and edited by Stephen Ward, is indispensable in the search for more about the couple.

The ideas formulated by James Boggs stretch across a generation, and it is useful to follow them from the beginning in the 1950s to the end of his life. He was a deep thinker, and some of his ideas are just as pertinent today as they were 40 years ago.

James Boggs left Alabama in the late 1930s for Detroit, which, in less than a decade ,would be the “Arsenal of Democracy.” Therefore, he had a unique perspective on watching the changing aspects of race relations, union movement, and political formations.

Of course, to mention Boggs’ name in Detroit, even among the current crop of young activists, would draw immediate recognition. The next thought would be of Boggs’ lifelong companion, Grace Lee Boggs, who, in her 90s, is still cogent and restless. While the two revolutionaries were inseparable during their years on the ramparts, we devote this column to the male member because he is no longer with us.

Boggs was born on May 27, 1919, in Marion Junction, Ala., not too far from Selma. His place of birth, as we have come to learn, was infested with nightriders and members of the Ku Klux Klan, who were not opposed to expressing their feelings about Jim Crow using a noose. This was no place for someone with an inkling of resistance, and by the time he was 18, Boggs caught the first train smoking for Detroit, following a trail that had been worn by thousands of blues people from the region.

He arrived in Detroit with empty pockets and a head full of dreams, settling into the city’s Black Bottom section with relatives. Three years later, Boggs secured a job at a Chrysler assembly plant, where he would work for nearly 30 years.

In a matter of months, his spirited resolve and unshakable desire for fair play were a boon to the United Automobile Workers, where he became a member of the so-called “Flying Squadron,” a group that provided protection to striking workers on the picket lines.

In the union’s Local 7, Boggs was involved in several committees, all of which provided some of the lessons that would ground his later theoretical articles and books about the labor movement, about “strikes, wildcats, picketing, goon squads and stuff like that,” he would later write.

By the 1950s, Boggs, having sampled the political tendencies of the UAW, NAACP and a few community groups, joined a collective that had split from the Socialist Workers Party. It was in this context that he met and married Lee, who, with her Ph.D. in philosophy, made them a political odd couple. But always inquiring thinkers, they broke with the group and thereby abandoned Marxism and the notion that the working class would be in the vanguard of revolutionary change.

July 27, 2004: Sen. Barack Obama gives the keynote address in Boston at the Democratic National Convention that introduced him to the American populace.

August 2, 1924: James Baldwin, one of the nation’s most celebrated authors, is born in this date in Harlem.

Portions of that new theory, which included full employment, a critique of automation and the decline of the power of the United States, are chapters in his first and possibly most influential book, “The American Revolution,” published in 1963. It was a benchmark for Boggs and quickly established him among the foremost independent thinkers and revolutionaries in the country. He was consistently in demand on college campuses and by radical community organizations.

Obviously, he was very much available for the growing militancy in Detroit at that time and joined several formations, including Group on Advanced Leadership, the Freedom Now Party, Uhuru (a small contingent of militants based at Wayne State University) and the Shrine of the Black Madonna. The city was a political seedbed of Black nationalism and the subsequent Black power movement, with Boggs’ ideas playing a prominent part in these developments.

In the 1970s, the Boggses were key founders of several small groups with a focus on domestic and international affairs. It was during this period that Boggs began to stress the outlook that the city was a “Black man’s land.” He and his wife formed the Advocators, which grew out of the Committee for Political Development and later joined the National Organization for an American Revolution.

Boggs’ often talked about the awesome responsibilities of revolutionary leadership—which was the title of one of his many publications—and this was a subject he by no means took lightly, always willing to take time to discuss his ideas and differences with anybody. “Over the years in our living room on Field Street,” said his wife, “he held forth to hundreds of individuals: activists, students, writers—local, national and international. Over the years, he also spoke to scores of university classes all over the country (also in Italy in 1968), always trying to expand the minds of young people by raising new questions.”

Some of what his wife cites above was apparent in one of his last published articles, in which he noted: “Historically, new methods of thinking have come out of young people. Just as in the early 1960s SNCC youth spearheaded a new direction in the struggle for civil rights in the South, young people can inspire Detroiters to pioneer in building the city of the 21st century—as we pioneered in the struggle for dignity of labor in the 1930s and for Black political power in the 1960s and 1970s.”

When “Jimmy,” as people referred to him and a name he accepted, died in 1993, there was an outpouring of grief from his comrades and friends, as well as from across the globe from people who only knew of him from his ideas—and those ideas continue to have merit and worth in this the digital age, a period he forecast.