Paul Robeson Jr, the son of a legend who made his own mark, dead at 86 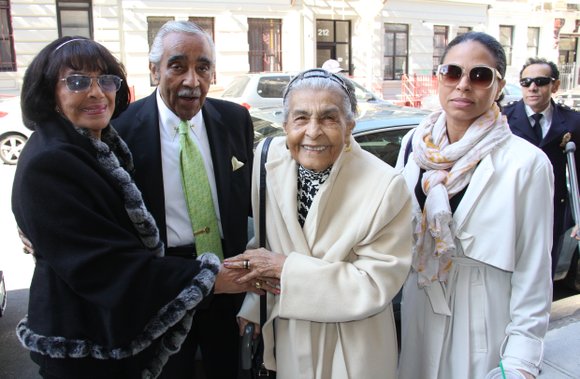 The legendary Paul Robeson told his son not to bask in his shadow but to “be your own man,” and Paul Robeson Jr. heeded that advice and much more from his enormously gifted father, marking his own path while diligently protecting his father’s legacy. Someone else will have to take on that task. The younger Robeson, 86, died last Saturday, April 26, in Jersey City, N.J.

The cause of his death was lymphoma, according to his daughter, Susan Robeson.

The elder Robeson (he died in 1976 at 77) certainly cast an incomparable shadow across the ages, and Mary McLeod Bethune called him “the tallest tree in our forest.” But the younger Robeson demonstrated in so many singular ways his own contribution to political activism, research and writing, curatorial and archival management, engineering and Russian translation with the same versatility and excellence exhibited by his father.

Merely protecting and keeping his father’s legacy from being impugned and misrepresented occupied much of his time. And this habit of taking on interpreters became a huge public dispute in 1978 when “Paul Robeson,” a one-man show starring James Earl Jones and written by Phillip Hayes Dean, opened on Broadway. The younger Robeson was furious about Dean’s failure to capture his father’s political commitments and socialist leanings, so he assembled a coterie of notables to protest the play. That outcry practically stifled Dean’s creativity, and the whole incident now comes full circle since Dean died on April 11 in Los Angeles.

But overseeing his father’s—and to some extent his mother’s—records, diaries, speeches, photos and other memorabilia was just one of Robeson’s many duties and obligations. His association with his father put him in touch with nearly every notable civil rights leader in the country and globally, and over the years, he developed lasting relations with all of them, including Harry Belafonte, who in his artistic career has embodied much of the integrity of his idol.

The younger Robeson was born on Nov. 2, 1927, in New York City, and while his illustrious father is known all over the world, his mother, Eslanda (she died in 1965 at 70), should not be neglected for her own remarkable life, not only for caring for her husband in times of need, but also establishing herself as an anthropologist, world traveler, civil rights and women’s rights activist, journalist and a trained chemist.

At a very early age, their son began to accumulate his parents’ varied interests and cultural activities, both as a student in a top school in Moscow, a high school in Connecticut and at Cornell University, where he earned a degree in electrical engineering in 1949.

The younger Robeson was often asked about his father’s affiliation with the Communist Party, which he put to rest in several essays, interviews and his own books. No, he said, his father was never a member of the party, though a fervent “fellow traveler.” The son, however, did not equivocate on the fact that he himself was a card-carrying member of the party for several years, including during that intense period of witch hunting by the House Un-American Activities Committee. He said he left the party after he could no longer endure the stifling bureaucracy and corruption.

Leaving the party, though, did not mean he left the struggle; in fact, the younger Robeson expanded his reach and found his own voice on lecture tours, panels and as a keynote speaker and at fundraisers for worthy causes.

During Russia’s era of Gorbachev and perestroika, he was a passionate advocate and was willing to devote much time on this issue, and the airwaves at WBAI were a friendly platform for this discussion, as was the Brecht Forum.

Challenging the plethora of books, especially the biographies about his father, became an endless crusade, so much so that he finally resorted to publishing his own accounts. The first book, “The Undiscovered Paul Robeson,” was a riveting recollection in which he revealed the intimacy between him and his father. “My father seemed to be quite proud of me, although, as was his custom, he rarely praised me directly,” Robeson wrote.

With an accomplished wife by his side, Marilyn, and two children with promising careers (his son David died in 1998), the younger Robeson didn’t need anyone’s accolades; yes, he followed in his father’s footsteps, but the path he took was his own, and the voice he found belonged to him alone.