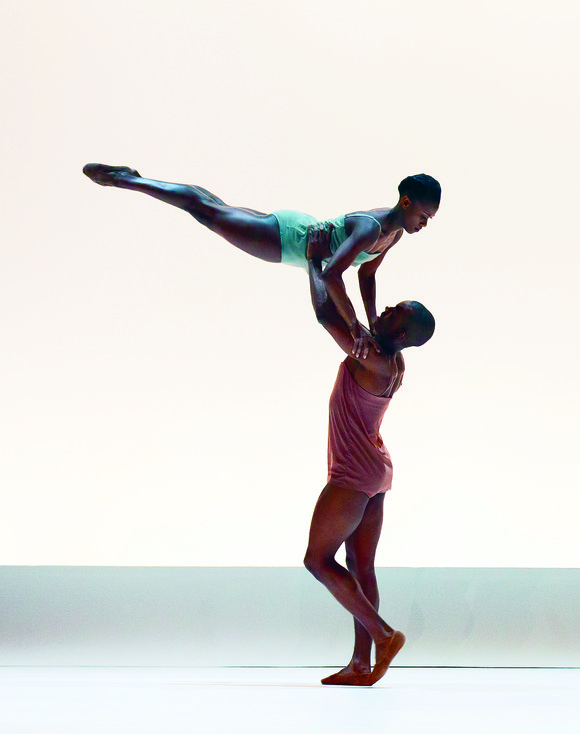 Highlighting the June calendar with three weeks of dance are Ronald K. Brown’s Evidence June 3-8 at the Joyce Theater and the Alvin Ailey American Dance Theater, and June 11-22 at David H. Koch Theater at Lincoln Center for the Performing Arts.

In two programs, Brown revives older works and brings new works. Program A includes the premiere of “The Subtle One,” described by Brown as “an affirmation of how the inspirational presence of another being influences how we move physically and spiritually in life’s dance,” and features a jazz suite by pianist and composer Jason Moran. Also on Program A is “Ife/My Heart” (2005) and “Torch” (2013), both by Brown. Rounding out Program A is “Ghazals” by guest artist Asha Thomas in collaboration with Brown, and performed by Thomas with David Gaulein-Stef. Dubbed the classics, Program B features a host of signature Brown works, including “Ebony Magazine: To a Village” (1996), an excerpt of “Dancing Spirit” (2009) performed by guest artist Matthew Rushing of the Alvin Ailey American Dance Theater, “High Life” (2000) and “Upside Down” (1998), an excerpt from the evening-length “Destiny.” For more information, visit www.joyce.org.

In four programs, the Alvin Ailey American Dance Theater (AAADT) returns to the David H. Koch Theater at Lincoln Center for the Performing Arts. Featured is the world premiere of a yet-to-be titled work and the first collaboration with Robert Moses, plus the company premiere of Asadata Dafora’s 1932 solo “Awassa Astrige/Ostrich.” The new productions are Hans van Manen’s “Polish Pieces” and David Parsons’ “Caught.”

To recognize the 25th anniversary since the passing of Alvin Ailey, Artistic Director Robert Battle noted, “Alvin Ailey was a pioneer in creating an American modern dance repertory company, and I’m thrilled to extend his vision through an expansive variety of new and acclaimed works by the widest array of choreographers.”

To further celebrate the Ailey legacy, the yearly gala has a different spin; it’s now called the Ailey Spirit Gala. This inaugural Ailey Spirit Gala, which happens on June 11, will feature performances by students of the school, ancillary programs, plus Ailey II and AAADT. Audiences are also invited to a free workshop with AAADT alum and master teacher Nasha Thomas-Schmitt, called Revelations Celebration on the Plaza. The honorary chair of the Ailey Spirit Gala is Vanessa Williams. For more information, visit www.alvinailey.org.

May 27-June 1 – Cuba’s MalPaso Dance Company makes its U.S. Debut at the Joyce Theater with the premiere of “Why You Follow” by Brown and “24 Hours and a Dog” by MalPaso Artistic Director Osnel Delgado set to music by Grammy Award-winning pianist and composer Arturo O’Farrill (played live at certain performances). For more information, visit www.joyce.org.

June 20-22 – Dance icon Carmen De Lavallade returns to Jacob’s Pillow and opens the 2014 festival with “As I Remember It,” a new solo mixing story, memoir and her life’s experience on stage. De Lavallade holds the distinction of having the longest Jacob’s Pillow Dance Festival performing career on record, having made her Pillow debut with Lester Horton Dance Theater in 1953 and performing at the festival as recently as 2004 (with Paradigm). She now extends that record by another decade. For more information, visit www.jacobspillow.org.

June 24-July 12 – Savion Glover returns to the Joyce Theater for his annual season with the world premiere “of a show that … will display his ability to combine movement with rhythm and sound,” according to the Joyce’s website. For more information, visit www.joyce.org.

To be listed, send a press release to Amnewsdancecalendar@comcast.net.