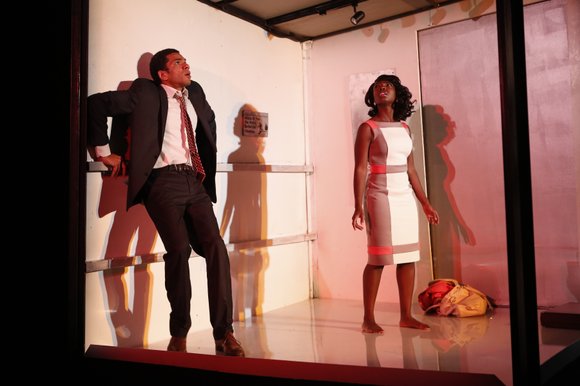 Ironically, the setting of Walter Mosley’s tragedy, “Lift,” is within the confines of an elevator. The two main characters, young Black professionals, discuss broader issues of race, class and relationships. Under the skilled direction of Marshall Jones III, Maame Yaa Boafo and Biko Eisen-Martin breathe an attractive chemistry and depth into their roles as strangers trapped indefinitely in an elevator in their corporate office building.

The dialogue is refreshingly original between the characters. Eisen-Martin as Theodore Southmore outshines his handsome features with a layered and compelling portrayal of a buppie with a dark secret. Baofo capably plays Tina Pardon, an ambitious beauty, who treats Southmore with a begrudging interest. In a not-so-subtle flirtation, Southmore asks her questions about her life and her boyfriend, which she does not want to entertain. Southmore presses Pardon about her “Black” identity and questions her dates with a “white” man. Pardon rejects his Black cultural bond sentimentality and expresses her anger at Black men “for not saving” her.

After a crash, when the elevator suddenly stops between floors and teeters tenuously, Pardon desperately asks the questions to which Southmore surprisingly holds the answers. Cries for help go unheard and tensions begin to rise.

This drama holds a few surprises as they try to figure a way out. Some of them are revelations about Southmore’s sudden “condition,” which physically disables him. The other discoveries come from Pardon and the illegal sidestep she took to pay her way through college.

Along the way, snatches of humor and witty observations are well placed. In addition, these two actors handily pull off several athletic climbs in and out of the elevator in search of help. Near the end of the play, they hear voices from others trapped in an elevator and their rescuers trying to free them. It takes some suspension of disbelief to accept the turnaround that unites them in a romantic and sexual closeness. However, the tragic conclusion is more shocking and easier to believe.

Exquisite lighting effects by Rocco Disanti heighten the dangerous tensions in this tragedy. Andrei Onegin ingeniously created a light but scary-looking set for the dangling elevator and standing ground above it for strangers looking to escape.