Over the moon for Misty Copeland in ‘On the Town’ 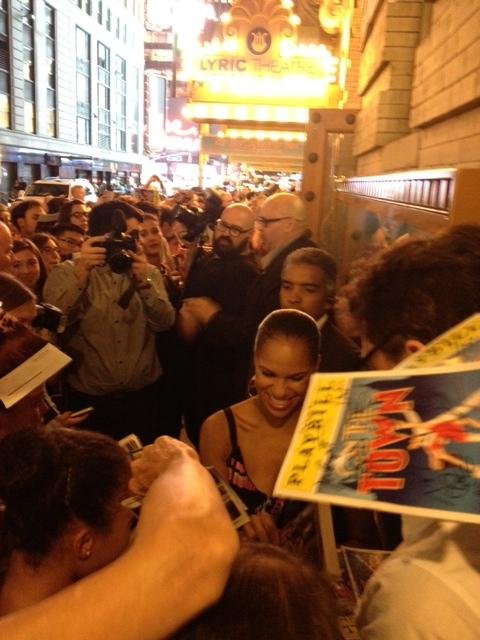 In the lead up to Misty Copeland’s Aug. 25 debut in the Broadway musical “On the Town” at the Lyric Theatre, anticipation-inducing announcements of her limited engagement were everywhere. Publicity emails featured a smiling Copeland in costume perched on pointe next to a video link of a news clip announcement that she was the first African-American elevated to principal ballerina in the American Ballet Theater’s 75-year history. Even in the back of city taxi cabs, TV monitors streamed news clips of her upcoming Broadway debut.

Then, too, there were the tabloids and the chatter in dance studio dressing rooms around the city, not to mention the folks talking after church services last Sunday. So, the explosion on social media should be no surprise. On Twitter, Copeland’s 72,600 followers includes Debbie Allen, who tweeted, “Knock ’em dead!”

Copeland even treated folks to an “exclusive behind the scenes prep video for ‘On the Town.’” Talk about buzz.

Copeland’s two-week appearance (Aug. 25 to Sept. 6) in “On the Town” was the talk of the town. So it was no surprise that on her opening night, there was an enthusiastic crush of theatergoers spilling onto the street in front of the Lyric Theatre before the show began and an equally enthusiastic crowd clustered around the stage door after the final curtain and the bouquet of flowers was presented to her by TV’s Robin Roberts.

Yes, Copeland’s “On the Town” debut was a smash. She had the audience in the palm of her hand from the moment she stepped onstage as Miss Turnstyle, Ivy Smith, the long-limbed ingenue and winner of the subway poster girl contest, to the moment she flew into a farewell embrace that ended a whirlwind romance with a sailor on 24-hour shore leave. Her performance was so seamless and flawless that on opening night, it felt as if she had been part of the show’s amazingly talented cast for months.

Straight out of the gate, her performance showcased her versatility. She delivered her lines with convincing sincerity. Her singing was surprisingly full-throated. Her dancing, well, as you’d expect, was absolutely spectacular. Whether she was being tossed through the air by a football team in a gasp-inducing number that was a montage of beauty pageant photo ops or simply standing on her head practicing her scales as instructed by a hilariously boozy vocal coach played by Jackie Hoffman, the audience was with her 100 percent. In fact, her sexy, sultry pas de deux with co-star Tony Yazbeck literally stopped the show, as folks wildly applauded a number that showcased her clean, crisp balletic technique and revealed a steamy, sexy quality that left no doubt that this woman is multitalented.

Clearly, while the entire cast is delightful—especially actor-singer Phillip Boykin, whose baritone could start an earthquake—Copeland’s performance was a triumph, and anyone who can should go online or run, don’t walk, to the box office and get tickets now.

Oh, and after the show, enjoy a Twisty Misty cocktail in honor of the Great White Way’s new Black leading lady. Just sayin’.