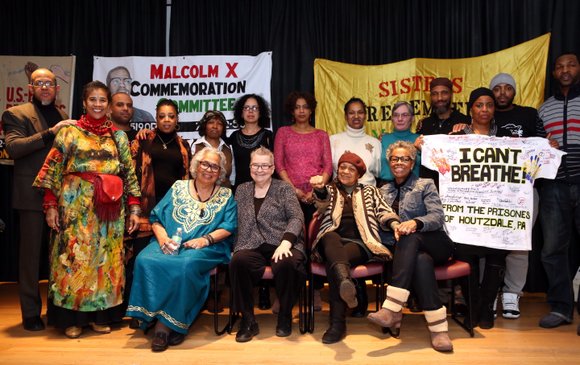 Last Saturday was a powerful, moving night for the people as the Malcolm X Commemoration Committee hosted its 19th annual tribute to Black freedom fighters and their families. The venue once again was 1199/Martin Luther King Jr. Labor Center.

The raw power of the event was tempered, however, by the “mysterious” death of MOVE prisoner Phil Africa Jan. 10. This event was also the first dinner tribute after the passing of MXCC’s founding chairman, Baba Herman Ferguson. Ferguson passed at 93 in September 2014.

This year’s tribute was anchored by some powerful queens, articulating and bringing together the honor and the commitment. Dequi Sadiki, the organization’s chair, clearly put in a huge effort to make the gathering happen. She also spearheaded the Sekou Odinga Defense Committee, and Nov. 25, that “incredible freedom fighter” walked out of a New York prison on parole, right into her arms, because she did some incredible work to make that happen.

Representative of the amazing humility of the freedom fighters, Odinga, quoted upon his November release in the event’s beautiful 19-page program, said these remarkable words: “When I think about the ultimate sacrifice that many others have made, I realize I have not done enough. There is so much more that needs to be done.”

Amina Baraka, the self-proclaimed artist for the working class, pulled the cross-section of dozens of freedom fighters from across the generations, who were on stage with her, sharing the gravity of her 50-year commitment to struggle, as she delivered her revamped working-class classic, “Song for the Masses.”

But the “warrior queen” who set the room fully on fire was the incredible Iyaluua Ferguson. Sundiata Acoli, recently recommended for parole after serving his 41st year in prison, had this to say about Ferguson: “Today we give a special honor to Sister Iyaluua, a leader in our struggle.”

Now in her 80s, the retired school teacher, the former editor of Nation Time newspaper, the writer of the deftly crafted “The Reluctant Warrior,” the memoir of her late husband, Mama Iyaluua went all in. In a very deliberate, tactful and nearly academic way, she saluted all of the protests of young people going on in the streets all around the country on police brutality.

“Black lives do matter, I guess,” she said with a stealth cynicism. But then she asked, “What if they had signs with a different slogan?”

She cited her appreciation for Akinyele Umoja’s recent book on decades of Black armed self-defense traditions against Klan terror in Mississippi. After outlining its courageous content and describing her affection for its tenor and character, she then asked another question: “Now what if all those young people out there in the streets had signs that said something else, like the title of his book ‘We Will Shoot Back!’”

Then she even went further and asked, “And what if, out of a segment of those young people, some of them were actually organized and prepared to do so?”

The roam roared with approval again.

“That is one of the main reasons why we are here,” said Zayid Muhammad, the MXCC press officer. “We are not just supporting our freedom fighters in their predicament. We are supporting them in their stance. By any means necessary is not an empty slogan.”

The full gravity of the evening came to bear, however, when Mama Iyaluua had her great-grandchildren do a partial roll call of the political prisoners and the time they have already served. The majority were more than 30 years and a good portion were more than 40 years. The room almost froze with an emotional chill when they got to Hugo Pinell and Ruchell Magee, the surviving Soledad Brothers, both who have now been in prison for 51 years.