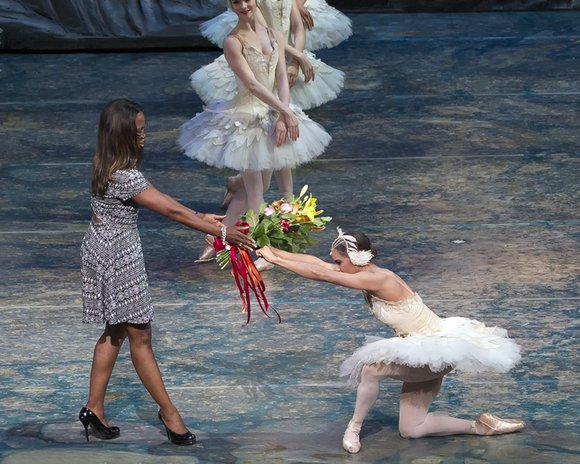 As the opening strains of Tchaikovsky’s “Swan Lake” filled the sold-out Metropolitan Opera House, a dancer in white flitted across the dimly lit stage, with its backdrop of a shimmering blue lake, and disappeared.

The ballet was just beginning, but the thunderous applause that greeted the fleeting vision of ballerina Misty Copeland revealed that the audience knew this occasion was no ordinary performance. A few days later, American Ballet Theater announced that Copeland has been promoted to the highest rank of principal, making her the first African-American female principal dancer in its 75-year history. For her many fans, by the time the curtain fell on the final act of “Swan Lake” and the audience leapt to their feet with a standing ovation, it was clear, even before the rave reviews and ABT’s magnificent announcement, Copeland’s debut was a phenomenal success.

The impact of Copeland’s “Swan Lake” was underscored by the presentation of two bouquets by ballerinas whose careers helped pave the way for this historic moment. They were 80-year-old Raven Wilkinson, a former soloist in the 1950s with the Ballet Russe de Monte Carlo and the National Ballet of Holland, and Lauren Anderson, who in the 1990s was the first Black principal ballerina with the Houston Ballet and broke ground as the first Black woman to perform the lead in a full production of “Swan Lake.”

Wilkerson glowed when she spoke of Copeland. “Misty is such an exquisite dancer,” she said. “When she stepped into fifth position on pointe in ‘Swan Lake,’ I felt I was dancing along with her. Before the debut, I left her a phone message: ‘May my love and admiration be the wind at your back.’”

Wilkinson recalled her own history with the American-based Ballet Russe de Monte Carlo, where she was a student at the school before being accepted into the company after three auditions. “At one point, someone took me aside and said, ‘You know there’s really no way they can take you,’” she revealed. “You see, the Deep South was a key part of its touring circuit. A Black ballerina would have meant lost bookings or worse.”

Still, Wilkerson persisted and was eventually accepted. The company decided not to publicize the fact that light-skinned Wilkinson was Black, even when she insisted that if asked, she could not lie. Word leaked out anyway, and in one Southern town, some white men barged into rehearsal, demanding to know where “the nigger” was. Wilkinson wasn’t there at the time, but Cuban-born Alicia Alonzo (later founder of the National Ballet de Cuba) once told this writer they confronted her, asking if she was the one they were looking for. Eventually, the men left.

To Copeland’s credit, she makes a point of paying homage to her predecessors. All too often, theirs are stories of dreams deferred, hearts broken, bodies criticized and psyches scarred by the long-held, ignorant notions about Blacks and ballet, especially for women. Once in a while closed doors opened, usually for males because they were so scarce.

Over the years, some Black ballerinas, such as Wilkinson and Anderson, would be exceptions to the rule. Janet Collins, in the 1950s, was the first Black prima ballerina with the Metropolitan Opera Ballet. Debra Austin, in the 1970s, danced with New York City Ballet.

In the 1940s, Betty Nichols, Arthur Bell, Talley Beatty and a few others danced with the Ballet Society before it became NYCB in 1948, and, in 1955, NYCB made Arthur Mitchell the first Black soloist with a major American company. In 1952, Louis Johnson, with Janet Collins and Delores Browne, one of a handful of Black students at the School of American Ballet danced Jerome Robbins’ “Ballade” with NYCB.

In the 1980s, Dance Theatre of Harlem ballerina Virginia Johnson was the lead in Fredrick Franklin’s “Creole Giselle,” a re-imagining of another iconic classical ballet. Around the same time, Anna Benna Sims joined ABT, which had rejected her as “too tall” years before. (She hadn’t gotten any shorter.) The earlier rejection led her to join Germany’s Frankfort Civic Opera Ballet, where she danced classical ballets that were off limits to her in America.

Then, in the 1990s, when financial woes forced DTH to disband, some of its dancers still found doors closed, in even the most obvious companies. A few were snatched up, such as Tia Jiminez (Boston Ballet), Alicia Graf (Alvin Ailey American Dance Theater) and Karen Brown (Oakland Ballet). For others, such as former ABT and DTH dancer Eric Underwood, now a member of England’s Royal Ballet, following their passion meant leaving America. Delores Browne said this all too familiar pattern was true for her generation of dancers in companies that were DTH’s predecessors, such as Edward Fleming’s New York Negro Ballet.

Browne recalls the blatant racism she encountered when Philadelphia-based ballet teacher Marion Cuyget brought her and five other advanced students to New York to study. “I didn’t have any trouble with the Russian teachers, but the white girls wouldn’t make room for me at the ballet barre and the boys refused, at first, to partner us,” she said. At one point, on the verge of tears, she tried to sneak out of class, only to be stopped by her chaperone. When the Russian ballet teacher realized what was happening, she made Browne the envy of her classmates by asking her to demonstrate steps. Browne later received critical acclaim as a member of Fleming’s ballet company.

Praising Copeland, Browne said, “Forty years ago I criticized this notion that we have to prove we can do ballet. Why should Misty be subject to the same thing today? Her ‘Swan Lake’ shouldn’t be about anything other than her ability. She’s an exquisite dancer. She should be able to just lean back and enjoy the ride.”

Ballet Hispanico’s Director of Classical Training and Performance Caridad Martinez, the only Afro-Cuban ballerina to become a principal with the National Ballet de Cuba, said being a Black ballerina wasn’t easy in her country either. “I wasn’t allowed to dance Giselle because she wasn’t Black,” she once told an interviewer. In 1987, things came to a head and she decided to leave, explaining why in a letter to Artistic Director Alicia Alonzo.

“At first I was very lucky to have her,” Martinez said. “She coached me in all my roles. She even took care of my hair. Then things changed, and she criticized my hair and even my nose. Looking at Misty in ‘Swan Lake,’ oh my God, the pressure! She is so beautiful. She has so much potential.”

Before the announcement of Copeland’s promotion, as many wondered if her successful debut in “Swan Lake” would prompt ABT to take this historic step, Delores Browne noted that only time would tell, saying, “As for Black ballerinas, we are here and we are strong, and that’s what hurts so much about this uncertainty about Misty’s future. If ABT wants to make her a principal, they will make her a principal.”