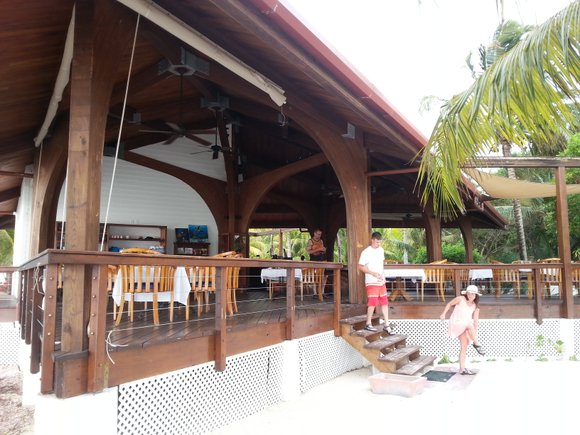 Guests walk right from the Lionfish Grill Pavilion onto the beautiful white-sand beach.

I'm not going to lie: The voyage to this Belizean island paradise 18 miles off the mainland is not for sissies. It can be a bit choppy and windy and you'll probably get wet.

But during the hour-long ride, you’ll be mesmerized by the numerous picturesque cayes, some large enough to accommodate several homes and other structures, while others held only a single palm tree and a small spot of sand.

Then suddenly it appears—our home for the next several days—the private island of Hatchet Caye.

Located on the protected side of the Meso-American reef, the second longest in the world (behind Australia’s Great Barrier Reef), the island encompasses only seven and a half acres, with spectacular views everywhere you look.

The resort offers an ultra-casual, remote, uncharted territory, off-the-grid island life vacation, but with comfortable accommodations, great amenities and Wi-Fi. And there are a lot of “nos” here: no roads, no vehicles, no phones, no front desk, no need to lock your doors and no worries. And although I’d been told to never to take “no” for an answer, it’s actually everything I wanted to hear.

Its boutique size and maximum 38-guest capacity is one of the major draws here, which, in the only four years it has been open, has attracted visitors from North America, Europe and other parts of Central America and commanded an astounding 46 percent repeat guest relationship, each visitor forming a lasting bond with the 25 staff members who, except for the couple who own the resort and their young daughter, live here 24/7 for three weeks at a time. It’s something very different than what you find on a mainland resort, yet it creates a truly authentic, loving, family ambience.

There is one honeymoon cabana with a king-size bed and six duplex cabanas with one or two queen-size beds, all with a quaint living room area, including a TV and DVD player, air conditioning and ceiling fans, multiple windows on two sides facing the gorgeous oceanfront views, a private deck with oversize cushioned furniture and a table and a hammock and/or cushioned chaise lounge chairs to the side.

In the main house, there are five beautiful, spacious rooms with the same luxury amenities with full or partial ocean views separated on two levels, with a crow’s nest above offering amazing 360-degree views of the island and surrounding ocean environment peppered with coconut trees, natural vegetation, an abundance of coral and beautiful white sand that comes right up to every structure on the island.

Among the unique aspects of Hatchet Caye is that they operate on solar power 18 to 22 hours a day; have their own organic garden, where they source a great deal of the fresh herbs, veggies and fruit used to create the daily fare; and fish daily or buy fresh catches from the local fishermen.

Also included is a fantastic snorkeling excursion (with just a national park entrance fee), where you swim with sand sharks, sea turtles and a wide array of the largest, most spectacular variety of stingrays you have ever seen. For an additional charge, you can get scuba dive certified and go out on a guided reef tour or arrange for a private, in-cabana crow’s nest or end of the pier spa service.

A TASTE OF THE ISLAND

It doesn’t take long to get into the groove here, especially at meal times, which really impart the meaning of “Island Time”–unrushed and peaceful, allowing you to soak in the ambience, savor the culinary flavors and dream about what life must have been like before mass tourism became the order of the day.

All meals are at the open pavilion Lionfish Grill, highlighted by a wide array of fresh, seasonal specialties. Among the tasty offerings we enjoyed was an “Island Breakfast” with black beans, fry jacks, fried lionfish and their special hash browns; homemade French toast; bacon and eggs Benedict; shrimp and chicken quesadillas; lobster and shrimp risotto; shrimp fettuccine Daviolo; spicy curry shrimp with rice and vegetables; and Greek salads.

But their most interesting entrees included lionfish, an exotic, beautiful and oddly enough invasive, venomous marine fish that when carefully pulled and scaled is absolutely delicious to eat, as evidenced by the numerous delicious lionfish dishes they serve including fish and chips, nachos, burgers, quesadillas and other lionfish creations.

Also under the pavilion is an inviting bar serving a bevy of specialty cocktails, wine, spirits and after-dinner libations, as well as a spacious reading and game area, complete with comfy chairs, benches and play everything from cribbage to dominoes, cards, Jenga, chess, Buzzwords, Trivial Pursuit, Scrabble and poker.

During our stay we did nothing and everything, and in such an unparalleled island environment that it would be hard to find anything else that comes even close to it, except buying or renting (which they do allow here for family reunions and special groups) your own island paradise.

Hatchet Caye is a true treasure and a unique gem that just has to be experienced at least once a lifetime.

I would be remiss if I didn’t mention that because of Belize’s location bordered by Mexico to the north, Guatemala to the south and west and the Caribbean Sea to the east, it sometimes garners an unfair rap associated with some of the narco-trafficking issues that do happen at times in and between the surrounding countries. But to paint a broad, all-encompassing, speculative brush across this beautiful country would be akin to saying that because there is crime in one major U.S. city (take New York City, for example) that it applies to everywhere and should be avoided.

On the contrary, Belize is overall a very safe, welcoming country where you will find some of the most genuinely, warm and accepting people, who only desire to be accepted as the beautiful souls that they are and who live to share a real exchange of energy and passion. It goes back to what I said before, that once you come here, you will “Belize” it!