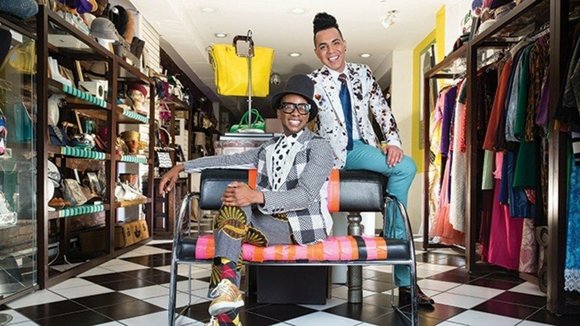 At B.O.R.N, the acronym for Borrowed, Old, Refurbished, and New

I had no intention of shopping in the open, airy vintage store that features both women’s and men’s couture clothing. The colors are bright, the styles eclectic, the merchandise irresistible. When the immediately recognizable JJ Langan greeted me and told me that the leather skirt I was handling was only $20, I could not resist.

Langan is one of Jonathan Brodrick’s associates who together cultivate immense charm and fashion know how at B.O.R.N, the acronym for Borrowed, Old, Refurbished, and New.

The founders of B.O.R.N, the acronym for Borrowed, Old, Refurbished, and New.

The Brooklyn born Brodrick started in vintage fashion by hosting shopping parties in the South Bronx where he initially planned to open a store. However, at his mentor’s suggestion, he opened in Harlem. Unrivaled in the area, he has a steady clientele though he noticed that at his former Harlem location, west of Lenox Boulevard, the clients were considerably wealthier.

“Who knew one street could make a difference! There was no haggling about prices or suggestions of layaway. The only deferred purchases were women with baby carriages saying ‘I need to bring the baby back home for a nap. I will return shortly.’” He always saw the women again.

He has a harder time moving higher end merchandise at his current location on 125th and Madison, such as that fabulous leather skirt. Yet, he has maintained a consistent client base that is just as devoted.

B.O.R.N.’s customers regularly suggested Brodrick consider doing a reality television show saying that the staff, periodically including Langan, Brandon Hood, Devin Stokes, Kristin Brown, and Terry Artis, are 'real characters.' Someone who had connections with the F.Y.I. channel came into the shop and proposed that they help produce a show. This is how B.O.R.N. to Style came to be.

The exposure on F.Y.I. expanded their customer base outside of the New York City area. B.O.R.N. to Style has been translated into multiple languages, including Spanish. New Yorkers are not the only customers who visit to the shop, but also Colombians, Indians and South Africans.

Brodrick showcases Harlem-based designers, including Katerina Lancova and Sharon E. Clarke. These designers put the new in B.O.R.N. Sharon E. Clarke is Brodrick’s personal friend who boasts clients such as Vanessa Williams. Also a renowned seamstress, she has worked for Dolce & Gabbana and Marc Jacobs.

Brodrick describes Katerina Lancova as an “outside the box” Czech designer who has taken up residence in Harlem. Her designs feature jackets that are trimmed with camouflage or leather that are edgy and yet feminine.

Brodrick has plans beyond the store and the show and has started designing himself. B.O.R.N. is home to his new Roosevelt hats – “These fedoras are inspired by the men in my family, including my stylish father, uncles, and grandfathers.” The hat’s crown features the silhouette of a face and is available in brown, pink, or black. The milliner is Harlem based. He hopes to eventually design eyeglasses.

Brodrick still awaits a final decision on whether B.O.R.N. to Style will be greenlighted for another season. “The talent is the last to know!” Even with such success, Brodrick wants you to remember that at its core, “B.O.R.N. is a small business. Every purchase helps keep the lights on.”