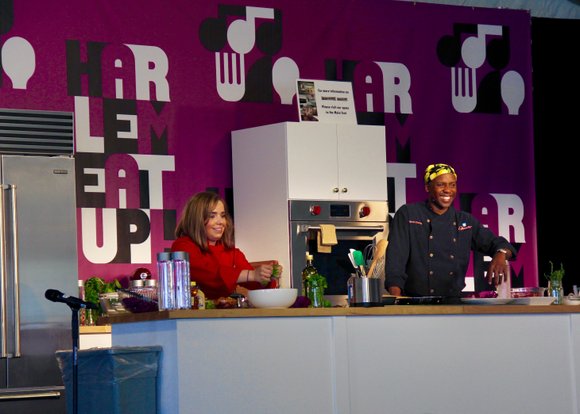 The inaugural Harlem EatUp! festival felt as if it whizzed by in a poof of smoke made of food, drink, art and culture. Harlem and New York City turned out for a celebration long overdue. If only it could have slowed down a bit so I could take every last dinner, talk, bite, laugh and more the festival had to offer.

I last left you after attending a “Harlem Talks” series panel at the Studio Museum. I failed to mention the massive and impressive yoga class led by Land Yoga I saw en route in the square of the Harlem State Office Building. I imagine it was a great way to get centered before heading off to Morningside Park for another first, “The Stroll”!

I walked to “The Stroll” with great anticipation. You see, in the interest of full disclosure, I was honored to be the official copywriter of the first Harlem EatUp! festival. I was responsible for capturing this signature event, and others, in a name. For this event, there could be no other. As a native, strolling the avenue is a Harlem pastime replete with food, art, music and, most certainly, seeing friends old and new along the way. It is the Harlem culture. Seeing the signage was a moment I won’t soon forget. Thank you! 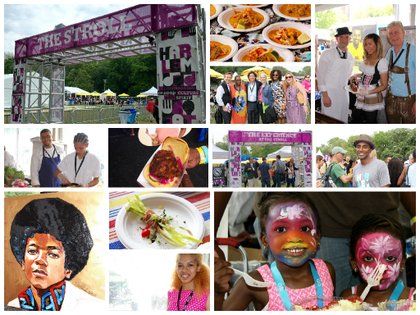 There were two parts to “The Stroll,” “The Avenue” and “The Experience.” The former was open to all and included food trucks and vendors, Harlem Business Alliance food business participants and culinary demonstrations from a lineup of chefs. “The Experience” was a walk-around tasting, showcasing over 25 Harlem restaurants and chefs, 28 wines, spirits and beers, including Harlem Brewery, plus a handful of Harlem artists and designers showing their crafts.

There was such a diversity of food represented at “The Strol l.” One of my favorites came by way of Grange Bar (@GrangeBarHarlem), with their seasonal shaved asparagus salad with prosciutto and greens. Chef Banks White of Corner Social (@CornerSocialNY) showed how the simple carrot can taste when put into his masterful hands. Also, I finally got to taste what’s happening over at Seasoned Vegan (@SeasonedVegan) with their “crayfish” made from burdock root. I don’t know how, but I need to taste more.

“The Stroll” ended with an impromptu dance party, with festivalgoers, vendors, sponsors and staff getting down to the deejay’s mix. It was a true celebration!

I returned to the scene the following morning early for “A Sunday Afternoon in Harlem” as a sponsor to load in our booth. On that day, the Amsterdam News and AmNewsFOOD would be signing up subscribers while our AmNewsFOOD winners, Chez Diarra African hot sauces and Simplicious Foods vegetarian eggrolls, presented samples of their products to hungry visitors. They were a huge success. Congratulations to them!

The rest of Sunday’s event was even more packed than Saturday’s, as all were welcomed on the grounds to purchase foods from vendors and the farmers market, listen to live gospel music, be active with the Knicks and Red Bulls or just sit and watch it all. My only bite that day came by way of Harlem Shake (@HarlemShakeNYC) with their spicy jerk chicken sandwich. It was just in time, too, as my multiple Hendricks gin cocktails were catching up with me.

I am so elated to have participated in the first, hopefully annual Harlem EatUp! festival. Over $90,000 was raised for Harlem beneficiaries Citymeals-On-Wheels (Harlem’s homebound elderly) and Harlem Park to Park (Harlem small business). It is a great thing when we can come together as a community to help ourselves and each other.

Big congratulations to Marcus Samelsson, Herb Karlitz, their teams, the sponsors and the particpants! Now head back into the lab as the second annual Harlem EatUp! festival is but a year away.

And don’t miss a bite of the new Amsterdam News food section, AmNewsFOOD, by following us on Twitter and Instagram at @NYAmNewsFOOD for all things food in and around Harlem and greater New York City, too.