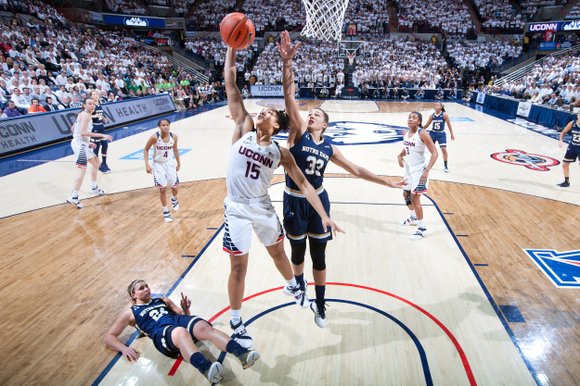 As Division I women’s basketball heads into the Final Four this weekend, the University of Connecticut will try to establish yet another record in the sport of basketball—four consecutive NCAA championships. The Huskies already hold the longest winning streak in D I college basketball (female or male) at 90 games, established 2010, and have won 10 national titles over the past 21 years. Currently on a 73-game winning streak, the team still has two more huge games to win.

“I know how badly the girls on the team want to win and I know they have the talent to do so,” said New York Liberty center Kiah Stokes, a UConn alumna and part of the last three NCAA titles. “[Fans] don’t know how much hard work and preparation goes into being as good as most UConn teams are. We watched previous teams to learn how they played, to see how much they wanted to win and how competitive they were when they played. We all know what it was like and we know that winning a championship at the end of the season makes everything worth it.”

Three players on this year’s team—Moriah Jefferson, Morgan Tuck and Breanna Stewart—are nominees for All America honors, but most eyes are fixed on Stewart, a versatile 6-foot-4 forward who can post up on the block and shoot the three. She was recently featured on the cover of Sports Illustrated, the only woman among four covers celebrating March Madness.

“As a leader, she knows what it takes to win and her confidence in herself and quest to be the best inspires her teammates,” said Chasity Melvin, former WNBA All-Star and basketball coach/consultant, who calls Connecticut coach Geno Auriemma a mastermind. “Their practices are harder than any of their games. For UConn, the NCAA Tournament is when the real season begins and all that matters is winning that championship.”

“Connecticut does not focus on records or awards when it comes to the tournament,” Stokes said. “I know that if this UConn team continues to play well, they have a really great chance of winning four in a row, but right now they are just thinking about the next game.”