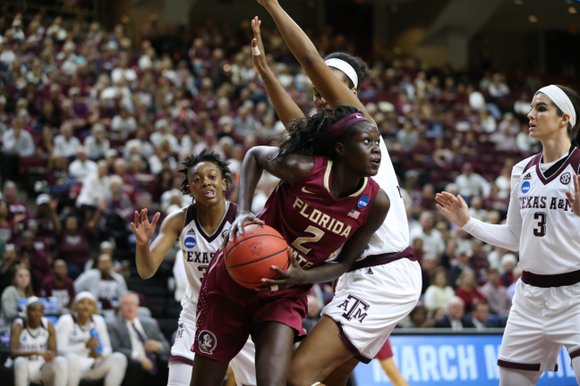 The first pick of the 2016 WNBA draft surprised no one. As expected, the most decorated player in women’s college basketball, Breanna Stewart of the University of Connecticut, was selected. Her Huskies teammates, Moriah Jefferson and Morgan Tuck, followed at two and three.

The New York Liberty, which had the best regular season record in the WNBA last year, had the 12th pick. They chose Adut Bulgak, a 6-foot-4 center from Florida State University. A few years ago, such a moment seemed impossible to Bulgak. Born in Kenya, her family immigrated to Canada in 1999. She grew up in Edmonton, Alberta, which doesn’t have as vibrant a basketball scene as Ontario. Although she went to prep school in South Carolina, college scholarship offers weren’t coming her way.

A friend helped connect her with Trinity Valley Community College in Athens, Texas, where she became a two-time NJCAA All-American and WBCA NJCAA Division I Player of the Year in 2014. At Florida State, Bulgak has been team MVP and earned WBCA Honorable Mention All-America honors.

“I’m ready to learn,” said Bulgak, who watched the draft on TV with her teammates in Tallahassee. “I can’t wait.” This trip won’t be her first to New York. The Seminoles played in the LIU Turkey Classic last November. Once she’s done with final exams, she will head to training camp.

“I’m so blessed and thankful for the opportunity that Seton Hall gave me,” said Richardson, a graduate student who previously attended Rutgers and Florida State, where Bulgak was a teammate (Richardson gives Bulgak high praise). “My journey wasn’t the smoothest, so it feels nice to have something at the end of it to be so proud of. Coach Bozzella really allowed me to be myself in his program. That’s what I’ve been seeking. I came in with the mindset that I want to be happy, and I really accomplished that. Now, it’s the start of something new, and I’m ready to take it head on.”