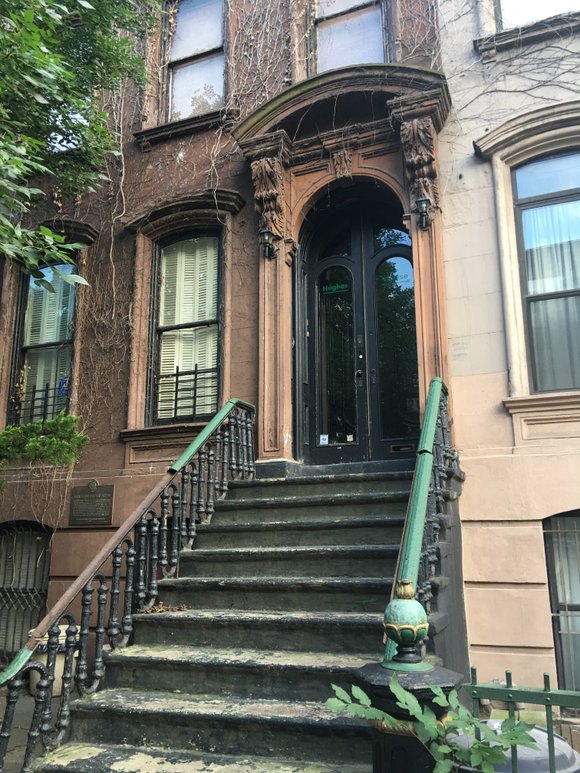 ressure to sell one of America's great writers' Langston Hughes house is escalating. The current owner listed it for a mere $1 million a few years ago, but it didn't sell. For now, the home sits empty. The owner doesn't live there. No one does. Paint is chipping off the front steps. Heather Long/CNN

Over 800 people have donated to a nonprofit arts group that plans to turn Hughes' long-time home into an arts collective. Money and supported flooded in over the weekend after CNNMoney highlighted the effort to save the home from gentrification on Friday.

Journalist Dan Rather and African-American magazine The Root shared the story on Facebook, among others.

"We are so grateful for the outpouring of support. We will be able to sign a three year lease with the option to buy or renew," says Renee Watson, a writer in Harlem who is leading the campaign.

Hughes lived on 20 E. 127th Street in East Harlem from 1948 until his death in 1967. It was an epicenter of the Harlem Renaissance, with jazz and poetry regularly heard by anyone passing by.

Donate to save Langston Hughes' home

Today, the home sits silent. No one lives there. The current owner has attempted to sell it before. With property values in the area skyrocketing, Watson figured it was only a matter of time.

The owner told Watson she would hold off on putting the home up for sale again, if Watson could raise $40,000 by September 1 to cover six months of rent. That goal has now been met -- and exceeded.

Before CNNMoney's story, the "I, too" arts collective (named after one of Hughes' most famous poems about African-Americans, which ends with the line "I, too, am America") had raised about $25,000 from 238 people. Now the group has over $52,000, as over 550 more people joined in with donations.

Watson's ultimate goal is to raise $150,000. That would be enough for Watson and her all-volunteer team to rent the home for the full year, renovate it a bit and open it to the community for readings, workshops and other events.

Housing prices in Harlem have shot up in recent years. The current owner tried to sell the home as recently as 2011, for a mere $1 million. The deal fell through. Now real estate agents estimate that it's easily worth over $3 million.

The area is known as the last bastion of affordability on the entire island of Manhattan. It's just north of Central Park and accessible by several subway trains. There's even a Whole Foods grocery store opening near the Hughes house soon.

The home is landmark protected, so the current owner -- or any future owners -- would have trouble simply tearing it down and putting in a modern condo.

But for Watson and many donors to the project, the goal isn't just to keep the home from going to the highest bidder, it's to revive the house as a place as a cultural center. With donations pouring it, it will no longer be a "dream deferred," like the first line in one of Hughes' poems.