City Hall: 'We want accountability from cops and de Blasio' 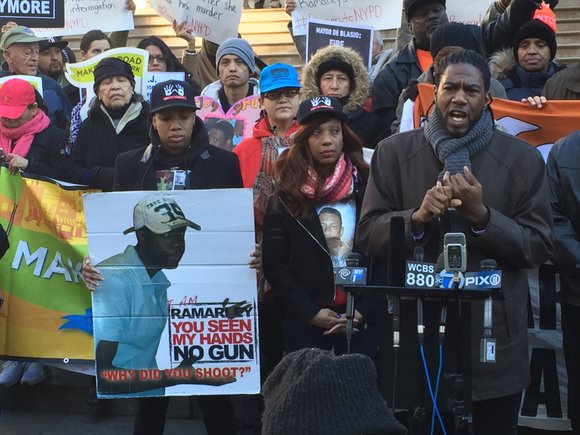 Tuesday marked four years since Ramarley Graham was killed in his own home by members of the New York Police Department. At City Hall, activists, elected officials and the parents of Graham, Eric Garner, Anthony Baez, Shantel Davis and Mohamed Bah called for officers to be held accountable for the deaths of unarmed men.

“Mayor de Blasio may not have been in City Hall when Ramarley was killed, but if he’s truly committed to real reform that holds police officers accountable for violating their fundamental oath to ‘serve and protect,’ then he needs to remove these officers from the NYPD,” said Constance Malcolm and Franclot Graham, Ramarley Graham’s parents. “Killing an unarmed teenager after forcing yourself into his home without legal justification, followed by consistently abusive treatment of his grieving family members, warrants dismissal. We demand that the Mayor de Blasio and city government unequivocally stand up against wrongdoing by those acting on its behalf, and the record is clear in the killing of our son Ramarley.”

Some of the organizations on hand to lend support at the rally included Communities United for Police Reform, New York Communities for Change, the Malcolm X Grassroots Movement and Picture the Homeless.

On Feb. 2, 2012, Graham, 18, was killed by NYPD officer Richard Haste, who burst into the home without a warrant. Graham’s grandmother was then questioned for seven hours while she was refused access to a lawyer. The family said that Malcolm was assaulted by police when she tried to pick up Graham’s grandmother at the precinct.

Haste was indicted by a Bronx grand jury on two counts of manslaughter. That charge was eventually dismissed by Judge Steven Barrett because of a prosecutorial error made by someone in Bronx District Attorney Robert Johnson’s office. In a second attempt, a grand jury decided not to indict Haste.

“They are showing they are complicit in this kind of action with the NYPD,” said Joo-Hyun Kang, director of Communities United for Police Reform.

Kang, along with Malcolm and Graham, hand-delivered a letter to City Hall addressed to de Blasio and first lady Chirlaine McCray. The letter, penned by Graham’s parents, discusses how Haste still having a job with the NYPD speaks volumes about the relations between the police and the community.

“It is our understanding that officer Haste has received nearly $25,000 in pay raises since shooting Ramarley,” read the letter. “That is horrific and unacceptable. It is sickening for any penny of our tax dollars or any New Yorkers’ for that matter to be received by any of the officers who were responsible for the murder of our son and the cover-up afterwards. What message does this send to Black and Brown youth in this city, like Chinnor? What message does it send to the tens of thousands of officers in the NYPD? And what message does it send to all New Yorkers?”

“Right now, we have an ability to show the change that we need to see when it comes to police,” said Williams. “We have an opportunity to show young Black and Brown men, and women, that their lives matter in this city.”

Gwen Carr, Eric Garner’s mother, kept her comments about the officers involved in Graham’s murder, short and to the point.

“We need them off the force,” said Carr. “They are bad apples.”