Addie Waites Hunton, a crusader for justice and women’s rights 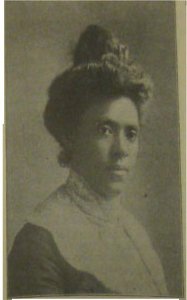 If William Alphaeus Hunton Jr. is an “Unsung Valiant,” as his wife, Dorothy, wrote in his biography, Hunton’s mother was an even more obscure personality, but one, like her son, worthy of consideration.

We should note, first of all, that Alphaeus was an assistant professor of English at Howard University for 17 years before resigning the position to become active with Paul Robeson as executive secretary of the Council on African Affairs. Later he would migrate to Ghana and continue the work on the “Encyclopedia Africana” started by W.E.B. Du Bois.

From this brief paragraph there is at least a hint of Alphaeus’s pedigree, and it is indeed impressive. His grandfather Stanton was a follower of John Brown.

His mother, Addie Waites Hunton, was born June 11, 1866, in Norfolk, Va. Her mother died when she was very young, and she was sent to Boston to live with her maternal aunt. As a student at the prestigious Boston Latin School, she excelled and subsequently attended Spencerian College of Commerce in Philadelphia, where she was the first African-American graduate.

She further studied at City College in New York City and at Kaiser Wilhelm University in Strasburg, Germany, according to Dorothy Hunton. But another biographer places the college in France. Trained as a sociologist, Waites Hunton taught at Alabama A&M and for a while in Norfolk.

In 1890, she met William Alphaeus Hunton Sr. and three years later they were married and soon living in Atlanta, where he was among the pioneering Black leaders at the YMCA. During this period, Waites Hunton worked as a secretary at Clark College when she wasn’t busy helping her husband in his duties.

By 1906, following the race riots in Atlanta, they moved to Brooklyn. She had four children, but only two of them survived, William Alphaeus Jr. and Eunice, as Dorothy Hunton noted in her book.

Because of her skillful proficiency and sense of commitment now to the YWCA, she was given larger responsibilities. When she was appointed secretary in the organization, she began traveling to recruit Black women to the Y. For a year, 1909 to 1910, she studied in France, taking her children with her. Four years later her husband died just as World War I was erupting.

During the war, she and two other women became the only women workers assigned by the U.S. Army to work with 200,000 segregated Black troops stationed in France. Along with Kathryn Johnson, who served with her, Waites Hunton wrote a monograph on the experience, “Two Colored Women With the American Expeditionary Forces” (1920). Mainly assigned to comfort the Black troops who primarily prepared burial grounds, they reflected on the arduous tasks before them. “Strange that the value of such a task did not gather full significance in the minds of all American soldiers. Strange that when other hands refused it, swarthy hands received it! Yet, perhaps, not so strange, for Providence hath its own way, and in those American cemeteries in France we have strong and indisputable evidence of the wonderful devotion and loyalty and the matchless patience and endurance of the colored soldier.”

Johnson and Waites Hunton’s endurance and fortitude should not be ignored during this traumatic time. Back from the war, Waites Hunton took on another battle—women’s rights. She worked tirelessly on behalf of the suffragette movement and was a national organizer for Mary McLeod Bethune’s National Association of Colored Women. After white women were given the vote with the ratification of the 19th Amendment, Waites Hunton continued her crusade for the same opportunities for Black women, principally through her campaigns in the dangerous South.

When Du Bois began gathering the voices and support for the Fourth Pan-African Congress in 1927, Waites Hunton was among the volunteers, having already been an active participant in the international peace movement. At the same time, she was a prominent leader for the NAACP as both a vice president and field secretary. She also authored a scathing indictment of the U.S. for its nefarious dealings in Haiti.

In the 1930s, Waites Hunton began working on a book about her husband’s life much in the manner of her daughter-in-law’s work on her son. It was published in 1938 and is titled “William Alphaeus Hunton: A Pioneer Prophet of Young Men.” Ironically, both the Hunton men had to rely on their spouses to document and celebrate their lives.

Waites Hunton must have been deeply pleased to follow her son’s remarkable career, his uncompromising activism, particularly his close association with Robeson and Du Bois. That life is thoroughly detailed in Dorothy Hunton’s “The Unsung Valiant.” And she followed with more than an occasional interest in the struggle her son was enduring as a leader in the radical National Negro Congress, which that was relentlessly hounded by the House Un-American Activities Committee.

It was during this phase, especially during World War II, that mother and son were united in their outlooks, and Alphaeus confessed, according to his wife, that it was his mother and her circle of friends that provided him with a better understanding of the war against Japan. He was shocked by their viewpoints—their wish that Japan would win the war. “Some thought Japan was justified in kicking the ‘white man’ out of China and exploiting the Chinese themselves,” Dorothy Hunton wrote, quoting her husband.

Like her son, Waites Hunton was certainly heartbroken when the NNC was no longer able to wage its battle against racial injustice and was forced to disband. While her son shifted gears, to some extent, and apply his energy and insight to the newly created Council on African Affairs, Waites Hunton was gradually receding from the frontlines.

She died in Brooklyn June 21, 1943, having, as one biographer wrote, “dedicated her life to issues of racial and gender equality.”