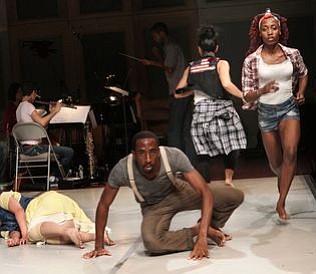 There is beautiful movement, live music and a good deal of theater in Edisa Weeks’ “To Begin the World Over Again” (Gibney Dance, Agnes Varis Performing Arts Center, June 30 to July 2). Timed perfectly, or not, to run concurrently with the election season, “To Begin the World Over Again” puts the audience in the driver’s seat. They encircle the performance area, “dance” with the performers and talk among themselves, and they get to vote for a winner. The “host,” Michael Jay Henry suited in red, white and blue, greets everyone and offers fortune cookies with quotes by Thomas Paine, “... whose insight, advocacy [and] belief in humanity…” according to Weeks, was an inspiration for the work. The performers/collaborators (Ardella Bang, Angel Chinn, Johnnie Mercer, EmmaGrace Skove-Epps and Ricardo Valentine), dressed in various forms of red, white and blue or black, colonial jackets, skirts, shirts and pants, soon join, handing out various noise-makers or offering a basket in which to discard fortune cookie wrappers. Drawing the audience’s attention to the center, Henry waxed an insightful monologue quoting more Paine, and then composer/collaborator Joseph C. Philips’ Numinous ensemble of 11 musicians start with an overture. This activity was just the beginning.

The dancers are striking. On the periphery or inside the stage space, in repeating phrases, their legs and arms slice the air, and in large and sweeping circles they cover every crevice. In one instance, with colonial jackets off, an uncomfortable and unending run ensues from corner to corner. One at a time, one runner falls, gets sucked into the floor and after a time, returns to run again. At the end, they line up, then intermittently jump forward into a deep squat, arms reaching forward, settle, then jump back to the line. Were they runaway slaves? Were they on the auction block? From the audience, in a loud voice, Henry breaks the tension, “Ladies and gentlemen,” he says, “If you are not part of the solution, you are part of the audience.”

An election follows in which after five friendly solos, the audience “gets to vote” for one winner by using their noise-makers, stomping their feet or clapping loudly. Valentine is the winner, or as Henry put it, “the representative for democracy.” In only white underwear, Valentine follows with a solo that screams racial struggle from beginning to end, when he finally succumbs to the floor. After a while, the others return, stand him up and dress him. Weeks suggests that there is hope when each performer takes an audience member by hand, and in a well-meaning movement for unity, they flood the stage space.

The musicians join in, and Henry directs the continually growing group in lines and shapes around and around, and then, hand-in-hand in a circle, they sing, “We have it in our power …” over and over again. They end with one final quote from Paine: “Those who expect to reap the blessings of freedom, must, like men, undergo the fatigues of supporting it.” If the world outside was not on your radar, Weeks and company in “To Begin The World Over Again” brought it to your face.