How an underwater hoax spawned a sports legend 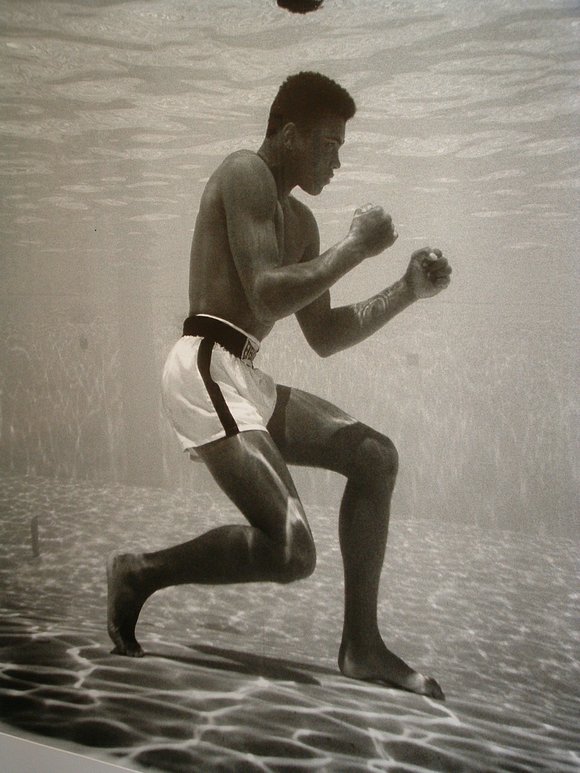 EDITOR'S NOTE: The following article was originally published in the New York Amsterdam News on August 18, 2005

As Flip Schulke described his last shoot over lunch one day in 1961, the nineteen-year-old boxer across the table devoured every word. Schulke, a Miami-based freelancer for Sports Illustrated, vividly explained how he had photographed water-skiers from below and published the pictures in Life magazine. At that moment, an idea formed in the young fighter’s head. Years before he would float like a butterfly and sting like a bee, Cassius Clay decided to lie like a rug.

The next day, Schulke met Clay at the Sir John Hotel in Overtown, Fla., and watched as he suddenly jumped into a swimming pool. Clay soon began to throw some punches and, after drawing Schulke’s attention, told him that the water pressure against his fists acted as a weight. Intrigued by this unorthodox exercise, Schulke called Sports Illustrated and asked if they would pay him to shoot Clay training in the pool over the next few days. His editor swiftly turned down the proposal and vowed to never again give Schulke a boxing assignment.

“Luckily, they said, ‘Go ahead and ask Life if you want to. If they’re dumb enough to, let them do it,’” Schulke remembered in an interview last week. “I learned later that what he did in the pool and all that stuff he just made up. Of course I didn’t know then. I didn’t learn until actually two days after he was the champion. He fooled all of us. He was brilliant.”

Schulke snapped a variety of black-and-white shots that day, carefully maneuvering his scuba tank as Clay threw left jabs, right crosses and almost everything in between, but he had fallen victim to a hoax. Clay, already eager to appear in Life when the pair sat down for lunch the previous afternoon, now knew Schulke had a soft spot for underwater photography. All he needed was a way to exploit it to his advantage. In actuality, the shoot marked the first and final time Clay worked out in a pool. After all, as trainer Angelo Dundee later pointed out with a laugh, Clay could only dogpaddle, not swim.

Despite the dishonesty behind the boxer’s actions, the gimmick turned out well for both parties. Life used five of the photographs for a spread in its Sept. 8, 1961, issue, giving Clay his earliest dose of national exposure and, decades later, transforming Schulke from an unknown lensman into a celebrated artist. Clay, of course, eventually changed his name to Muhammad Ali and became a heavyweight champion. His stunt had ensured Schulke’s place in photojournalism lore.

With Ali’s value as a cultural icon still rising, and celebrity memorabilia reaching its peak in a seller’s market, the Keith De Lellis Gallery in midtown Manhattan has placed a select few of Schulke’s shots on display for public viewing through Aug. 19. Prices vary depending on Clay’s pose and the position of his fists, with the average print selling for about $2,500 unframed. But the unquestioned gem of the collection, and the most expensive at $7,500, is a 48-by-32-inch shot of the boxer standing completely underwater in his Everlast trunks.

“He did that all on his own,” Schulke recalled, claiming that Life never ran the photograph because they thought he had posed Clay. “I turned around, and I was just grabbing another camera to take more pictures, and when I turned around he was standing on the bottom of the pool. And actually I have about six frames of him standing there.”

James Danziger, Schulke’s New York gallery agent, sold the print for $12,325 at a May auction in London, but his client still insists Clay should get credit for holding his breath and maintaining such a difficult stance in the pool. De Lellis, on the other hand, praises Schulke for steadying the camera. “It’s such a natural-looking picture, and yet it’s so incredibly hard to position yourself underwater,” he said. “You have to have such muscle control to hold yourself in that exact position – perfectly still underwater – for even a second.”

Schulke may be too humble to accept the accolades, but he revels in the fact that the world’s most famous boxer was an African American. “I’m glad he is a Black man,” he said. “I’m glad that he’s the most famous person in the world.”