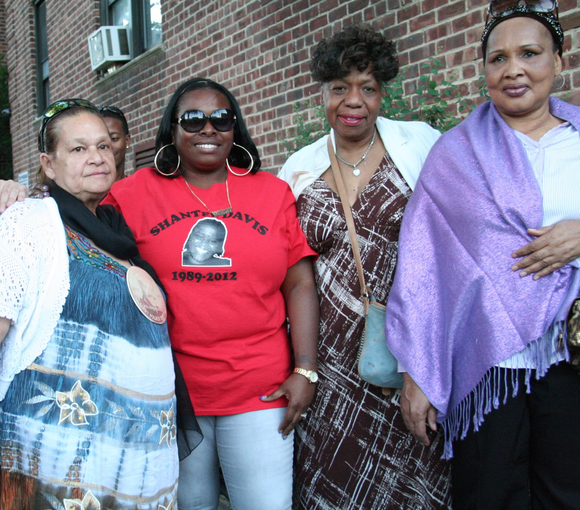 On June 14, 2012, Shantel Davis, 23, was killed by an NYPD police officer on 38th Street and Church Avenue in East Flatbush. Four years later, the family is still left with unanswered questions about what happened that day.

Each year, Davis’ sister, Natasha Duncan, reminds the neighborhood and the world about the brutal death of her sister with a candlelight vigil and demonstrations.

On the anniversary of Davis’ death earlier this month, a group of protesters, family members and community supporters gathered at the place where Duncan and her sister washed Davis’ blood off the street.

According to NYPD reports, Davis was observed running a series of red lights in a stolen vehicle before having a collision at the intersection of 38th Street and Church Avenue. When plainclothes officers approached the vehicle, there was an alleged struggle before Detective Phil Atkins fired his weapon, striking Davis in the chest. Davis was unarmed and was later pronounced dead at Kings County Hospital.

In an interview, Duncan explained that Atkins had been a terror in East Flatbush for years, often violently harassing young Black boys on the streets, treating the neighborhood like a prison camp. Court documents reveal Atkins had been sued at least seven times, with settlements amounting to $130,000 paid out by the city. But he remained on the force.

Duncan said that community members who witnessed the incident claimed the police confiscated both surrounding surveillance footage and cell phones from bystanders who may have recorded the interaction. The family has been petitioning the city and the NYPD to reveal what happened for four years to no avail.

Before the vigil, Duncan claimed that she discovered new media coverage that smeared her sister’s reputation.

“I almost didn’t make it here today because I’m not sure how much more I can do,” Duncan said between sobs. “When Shantel was killed, we didn’t even get to grieve properly because we had to change the perception of what they put out there of her, saying she was a criminal and she deserved to die.”

Duncan explained how her sister was treated in her last moments.

“My sister was shot in the chest. She said she didn’t want to die, but she was told to ‘shut the [expletive] up.’”

Others who were there to support the family at the vigil included Hawa Bah, the mother of Mohammad Bah, who was killed in his home Sept. 25, 2012; Francelot Graham, the father of Ramarley Graham, who was killed in the Bronx Feb. 2, 2012; and other family members of victims who have been killed by police in New York over the years.

“We need change and justice,” Bah said. “We need to hold those people accountable, put them in jail, take their pension, make them suffer. When we suffer, they should suffer also. I want the people who sit in those chairs, those people elected to protect us, to know how we feel burying our loved ones. They killed my son in front of my eyes.”

Local organizers are working to unveil the violent patterns of police throughout Black and brown neighborhoods in New York. Community worker Imani Henry of Equality for Flatbush says gentrification and police brutality are directly linked.

“I think it’s important [to note] that in 2012 there is a correlation of gentrification and stop and frisk violations and summonses being written,” he said, adding that homelessness is up at a record high in New York. Coalition for the Homeless claims that in April this year, there were at least 60,000 homeless people in New York, many of them families. According to the organization’s website, the number one reason for homelessness in the city is lack of affordable housing.

Henry said the influx of police and an increase of tenant harassment since 2012 in Black and brown neighborhoods have proven violent.

“In 2012, we in Flatbush started to have murders like Kimani Gray, Shantel Davis and before Sandra Bland, there was Kyam Livingston, who died in police custody in Brooklyn, a Flatbush resident. This has been our legacy. We’ve lost three people between 2012 and 2013.”

Further, Equality for Flatbush found that residents in neighborhoods such as East Harlem, Chelsea and Flatbush have been receiving a greater number of summonses, more harassment and violence from police since 2012. During a summer sweep, 300 officers flooded the neighborhoods of East Flatbush and East Harlem, which resulted in two high-profile beatings of Stephanie Dorceant and Arlondo Brissette, Henry said.

The New York Amsterdam News contacted the NYPD for comment about the case and to find out about the whereabouts of Atkins, however the press office had no updates or comments.