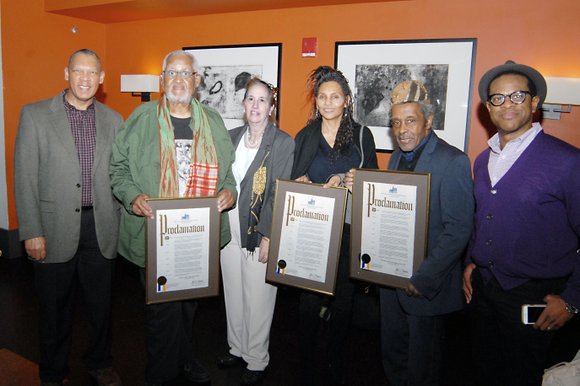 In celebration of Black History Month, the work of Harlem photographers was recognized during a reception in their honor Monday, Feb. 29, hosted by Manhattan Borough President Gale Brewer. As part of the celebration, the film “Through a Lens Darkly: Black Photographers and the Emergence of a People” was screened. This award-winning documentary explores the role of photography in shaping the identity, aspirations and social emergence of African-Americans, from slavery to the present.

Honoree Shawn Walker continues to shoot and exhibit around the globe more than 50 years after he joined with other photographers to establish the Kamoinge Workshop, an association of several generations of Black photographers. He has exhibited in museums and cultural institutions throughout the world, including the Smithsonian, the Schomburg Center, the Brooklyn Museum, the Whitney Museum, the International Center of Photography, the Museum of Modern Art, the San Francisco Museum of Art, the Studio Museum in Harlem and the Harvard University School of Art and Design.

Honoree Ming Smith is known for her informal, in-action portraits of Black cultural figures, from Alvin Ailey to Nina Simone and a wide range of jazz musicians. She was an early member of the Kamoinge Workshop. Ming has traveled extensively, showing her viewers a cosmopolitan world filled with famous landmarks and extraordinary landscapes. People continue to be her most treasured subjects. This reverence is most apparent in her series depicting African-American life.

Honoree Kwame Brathwaite has been considered the ever-present “photo-documentarian” of the Black Arts and Culture movement, the “keeper of the images.” He started as a jazz photographer after helping to form the African Jazz-Art Society and Studios, along with his brother, the late activist Elombe Brath, and other young like-minded artists in 1956. AJASS combined art, music, fashion, poetry, theatre and political activism into what became the beginning of the Black Arts Movement of the 1960s