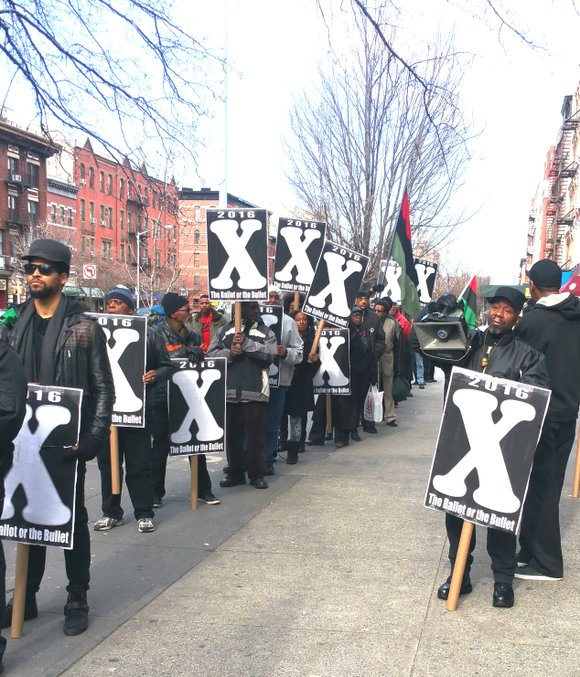 On the 91st anniversary of Malcolm X’s physical birth, this May 19, a variety of events throughout the New York metropolitan area will commemorate the occasion.

Malcolm X Day 2016 begins Thursday morning, with the 51st annual pilgrimage to where his body and that of his wife, Betty Shabazz, are interred, Ferncliff Cemetery in Hartsdale, N.Y. Those wishing to participate in the ceremony established in 1965 by Malcolm X’s sister, Ella Collins, are asked to assemble at the Adam Clayton Powell Jr. State Office Building (163 W. 125th St.) at 9 a.m.

The caravan of vehicles is scheduled to depart from the corner of 125th Street and Adam Clayton Powell Jr. Boulevard at 10 a.m. It is the very same location where Lewis Michaux’s National Memorial African Bookstore once stood and Malcolm X addressed the Harlem community.

Once at the cemetery, participants will meet other supporters, some who have trekked from far off places around the globe, to commemorate the 91st anniversary of Malcolm’s birth with various displays. The ceremony usually lasts a couple hours, as hundreds of school children from surrounding schools are chaperoned by their teachers.

After making the drive back to Harlem, participants will meet up with the Brooklyn-based December 12th Movement to conduct their 27th annual “Shut’em Down Black Power March,” an economic boycott of all businesses along 125th Street, from 1 p.m. to 4 p.m.

The self-determining feat is a sight to behold, as local activists utilize their power without waiting on any “permission” from government “laws” or “authorities.”

At the Malcolm X and Dr. Betty Shabazz Cultural and Educational Center (3940 Broadway), formerly the Audubon Ballroom, playing of Malcolm X’s speeches and dancing round out the evening.

The Schomburg Center for Research in Black Culture (515 Malcolm X Blvd., corner of 135th Street) hosts “Women Speak About Malcolm X,” for its annual celebration of his birthday, in collaboration with the Malcolm X Museum. The program will feature an all-women panel: Donna Auston, Dr. Sylvia Chan-Malik and Esmeralda Simmons, moderated by Johanna Fernandez.

“The Conversation will focus on human rights and social justice, with special guest prolific poet and writer Sonia Sanchez,” reads the press release for the event.

On the 8th floor of the Adam Clayton Powell Jr. State Office Building, a seminar reviewing Malcolm X’s historic April 3, 1964, speech, “The Ballot or the Bullet” will be conducted. A panel will discuss its relevancy today and tie it to the 2016 presidential election: “The Choice, Plebiscite, Reparations and Self-determination.” A viewing of the video “Malcolm X Speaks” will follow. For more information, call 718-398-1766.