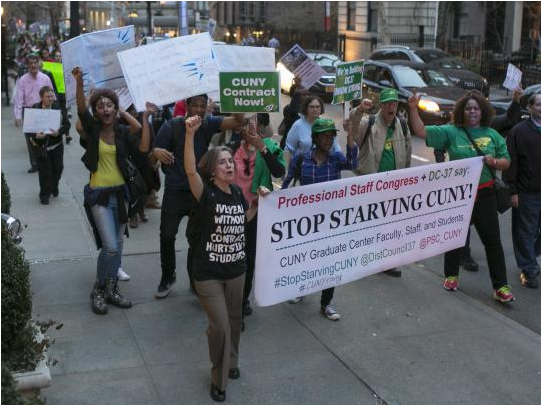 They’ve worked without a contract for five years and haven’t had a raise in more than six years. The City University of New York’s faculty and staff have had enough.

Members of the Professional Staff Congress voted in favor of authorizing a strike in order to achieve a fair contract from the university. Ninety-two percent of the voting members decided “yes” on strike authorization after the ballots were counted by the American Arbitration Association (the vote was held between May 2 and May 11).

While the vote doesn’t mean that PSC-CUNY will actually strike, Barbara Bowen, union president, said it should indicate how far the union will go to get a fair deal for their side.

“A 92 percent vote to authorize a strike demonstrates that the CUNY faculty and staff are willing to fight for the working conditions we deserve and the learning conditions our students deserve,” said Bowen in a statement. “The union’s goal is to reach a fair contract without needing to strike, but the CUNY administration must put a decent economic offer on the table. CUNY’s substandard pay and conditions are endangering the university’s core mission of teaching, learning and research.”

Bowen said the union wouldn’t take action during the current academic year but could possibly do something in the fall if they feel there’s no other choice.

New York State law imposes legal and financial penalties on public-sector unions and employees who strike or engage in other job actions, but voting to authorize a strike isn’t against the law. CUNY’s faculty and staff have complained over the years that low salaries have left schools scrambling to keep their top educators and caused the schools to lose out on potential recruits.

“During these past six years with no raise, I’ve earned tenure, published a co-edited book and taught a couple thousand CUNY students, many of whom face struggles academically and in their lives,” said Deborah Gambs, a sociology professor at Borough of Manhattan Community College, in a statement. “Yet for nearly two years now I have needed a roommate in my Queens studio apartment to help cover my rent. I’m not a starving artist! I am a tenured professional with a full-time job who lives in one of the most expensive cities in the U.S.

“I should be putting all my energy toward my students, who are working to overcome challenges far greater than the ones I face, but stagnant pay and rising costs don’t allow me to do that,” concluded Gambs.