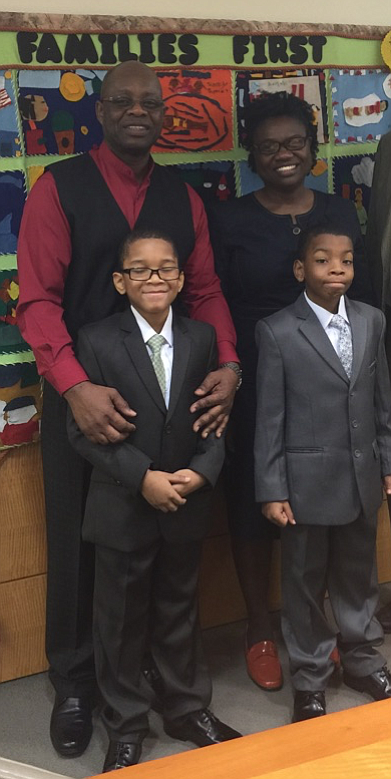 This Thanksgiving is very special for the Gillian and Orlando McAllister’s family as they officially add two more seats to their table this year.

The East New York, Brooklyn couple recently finalized the adoption of 9-year-old twins Timothy and Antonio, who they’ve known since the boys were 3-years-old. What started as short period of foster care turned into an unbreakable bond for the family.

The McAllisters met the boys in 2010 when they were placed in McAllisters’ home by the New York Foundling. The arrangement worked out so well that the couple constantly checked on the twins even after they were removed. The couple already had two biological children, a 16-year-old and 21-year-old.

“I love children,” Gillian McAllister said. “I decided to be a foster parent not with the intention of really adopting children. After the week they went away, we grew to love them and they were very nice children.”

Timothy and Antonio were staying with their biological uncle at the time, who did not want to adopt them. The Foundling then asked the McAllisters if they wanted to step in to be the twins’ permanent parents. The boys have stayed the McAllisters full-time since 2011 and the McAllisters are now their legal parents.

Currently, there are nearly 11,000 children in the city’s foster care system needing to be adopted. Approximately 60 percent are Black. For couples considering adoption, advocates say becoming a foster parent is one of the best ways to being the process of legally adopting a child. Some children stay in foster care for years, and the process to legally adopt a child can take up to two years.

Statistics show that older children of color make up a large segment of the population of children waiting to be adopted. Studies indicate that African-American children who come into contact with the child welfare system are disproportionately represented in foster care, and are less likely than children of other racial and ethnic groups to move to permanent placement.

Orlando McAllister advises couples considering adoption to do it out of love. Although the couple had initially planned to be foster parents, having the twins with them made them realize they could do more.

“The process to adopt them was not easy,” Orlando McAllister said. “But it was a pleasure doing it. I was doing it out of love and these children really wanted a family to be with. I am just happy that they are a part of our family.”

The twins are typical 9-year-olds in the fourth grade, whose world revolves around television, their tablets and playing computer games. Antonio enjoys math and science, and when he grows up he said he wants to be a general in the military.

Timothy likes gym class and wants to be an athlete when he grows up. He likes basketball, football, soccer and hockey.

To celebrate the adoption, the family recently went on a nine-day Caribbean cruise with extended family.