Trump, get your facts right on Central Park jogger case 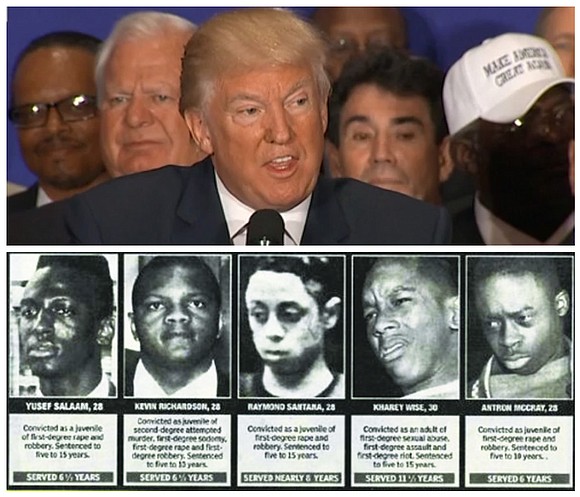 Editor's note: Paul Callan is a CNN legal analyst and former New York homicide prosecutor. He represented two Manhattan assistant district attorneys who were appointed by then-District Attorney Robert Morgenthau to conduct the reinvestigation of the Central Park jogger case. They were subpoenaed as nonparty witnesses in the Central Park jogger civil lawsuit. Follow him @paulcallan. The opinions expressed in this commentary are his.

(CNN) -- If Donald Trump really believes in his law and order campaign theme, he had better get his facts straight on the Central Park jogger case. Last week, the Republican presidential candidate repeated his bogus assertion that the dismissal of the charges against the five black and Hispanic youths (the so-called Central Park Five) who were convicted of the crime was "outrageous," as was the settlement of their civil lawsuit for wrongful imprisonment.

Amazingly, Trump's statement omits any mention of the actual rapist in the case, Matias Reyes, who was not just a convicted murderer and rapist, but a true demon of unspeakable cruelty. It's time Trump made the acquaintance of the man who actually raped the "Central Park jogger" before he further defames the men who were wrongfully imprisoned for years for a crime they did not commit.

It is perhaps a blessing that Trisha Meili, who has publicly identified herself as the rape victim in the Central Park jogger case, had no memory of the attack when she finally awoke from a coma after her nightmarish run on that fateful night in 1989. If she did, she might remember looking into the eyes of pure evil in the form of Reyes, an 18-year-old murderer and rapist who often used a knife to subdue his victims. These rapes were, according to some of his victims, followed by a grim choice for his prey: "Your eyes or your life." Most women opted for life as Reyes began stabbing at their eyes.

The "to be blinded or stabbed to death" option wasn't always the only choice offered by Reyes. He developed an even more insidious choice in the case of Lourdes Gonzalez, a 24-year-old pregnant mother who had the misfortune of crossing his path. While her three small children listened through a bedroom door of their basement apartment, their pregnant mother was sexually assaulted and stabbed multiple times. When it was finally over, the young mother had traded her own life for those of her children. This was the crime that finally ended Reyes' rampage of rape, murder and carnage in New York.

Reyes' semen and DNA were identified on clothing, Meili and at the remote Central Park jogger crime scene. There was no DNA or semen linking the Central Park Five youths who had been rounded up by New York cops as the "usual suspects" for questioning because they lived in proximity to the northern part of the park. No DNA or semen were ever linked to any of these young men because, notwithstanding Trump's past and current pronouncements, none of them was ever present at the scene. Reyes not only confessed to the crime, but years later led law enforcement investigators to the overgrown and remote crime scene.

How did the Central Park Five end up in the crosshairs of this case in the first place?

The New York tabloids had coined the word "wilding" to describe the activities of a small group of minority youths who were allegedly involved in criminal activity totally unrelated to Meili, and in a different area of the park, that night. The city's high crime rate had caused widespread fear, particularly in the wealthy white communities that bordered all but the northern areas of the park. The residents of those neighborhoods -- and many New Yorkers -- cherished the park as a safe oasis from the often dark and dangerous urban streets in a city descending into what seemed like chaos in the midst of the crack epidemic. The fear and desire for vengeance for this unspeakable violation of one of New York's most cherished assets, Central Park, was palpable and inspired an aggressive police investigation.

The five kids were confined to separate interrogation rooms and in the many hours of questioning to follow were told in essence that the detectives knew they had been in Central Park that night and that they had a choice: They could be witnesses or defendants. When a kid claimed innocence, the detectives, using what was then a standard interrogation technique, would say something to the effect of, "Your buddy in the next room will be going home because he says you did it." The message was clear: You'd better give us something or you are going down for the crime. The kid would then fold, making up a "confession" that put him at the scene, but minimized his personal role. When the swift "investigation" was over, the five kids had given "confessions" that made no sense and often contradicted each other.

The district attorney would face another serious problem prosecuting the case: No DNA was found that could link any of the young men to the scene or the jogger. The use of DNA in investigations, though, was in its early years, and juries didn't yet view it as the Rosetta Stone of criminal culpability. Plus, these tough-looking black and Hispanic kids were in the park, and, as Trump would later say in one of his tweets, they weren't there "playing checkers." But while the questioning and imprisonment of these innocents continued, Reyes roamed the streets free to maim, rape and kill. He wasn't picked up for another four months in connection with his other brutal crimes. Over 12 years later, he would finally admit to being the true and only rapist of the Central Park jogger.

Trump didn't help the situation by running newspaper ads calling for the restoration of the death penalty in New York and suggesting to Larry King that "hate" might be a proper weapon against violent crime. Trump's simplistic approach to crime in 1989 did nothing to achieve justice in the Central Park jogger case. Sadly, it contributed to an atmosphere of hatred and despair that caused five innocent young men to be tried and convicted for crimes they did not commit. Years later, Trump still refuses to admit his error.

Perhaps Trump should pay a visit to Matias Reyes at his upstate New York maximum security prison cell, where he is serving a life sentence, for a consultation regarding violent crime. There Trump may learn that true "law and order" advocates seek above all to put the right person behind bars. It's really the only way to make America both great and safe again.