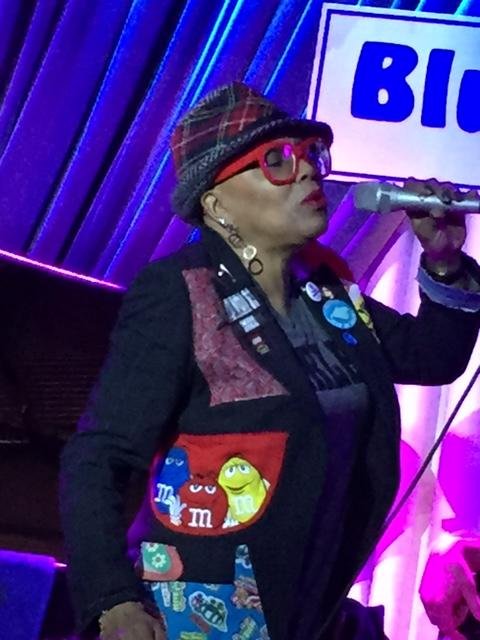 The late pianist St. Elmo Sylvester Hope was ushered into jazz history based on his musicianship, and as a genius composer and arranger. Last weekend his legacy was enhanced with the co-naming of Lyman Place as Elmo Hope Way—Jazz Pioneer (in the Bronx).

Elmo Hope, wife Bertha and baby daughter resided on this tree-lined block after relocating from California. There he wrote some of his best music, and many musicians came to visit, including his closest friends, the pianists Thelonious Monk and Bud Powell.

T.S. Monk III (Monk’s son) noted, “Naming a street after Elmo Hope is a great thing. It demonstrates how important this music called jazz is and the significant contribution made by Elmo.”

Teary-eyed Bertha Hope noted what it took to make this day happen and how proud she felt on this special occasion, and how honored Elmo would feel for such recognition. Joan Allen-Canada from California offered a heartfelt poem.

After the unveiling, a reception took place at the Bronx Music Heritage Center Lab, where Bobby Sanabria is the co-founder.

The Bronx has such a rich history of great musicians, and Elmo Hope Way is yet another aspect to inspire generations to come.

The guitarist Grant Green died at the early age of 43 and although he was not a household name, he was able to make an undeniable mark. His sound can be detected within the first few notes of playing. He had jazz veins mixed with his style of blues and funk as his albums “Blues for Lou” (Blue Note 1999 release) and “His Majesty King Funk” (Blue Note 1965) demonstrate.

Green spent his recording career (1961-65) at the premiere jazz label Blue Note, where the alto saxophonist Lou Donaldson introduced him to Alfred Lion (the label’s founder).

During the 1960s Green had a regular stand at the then popular, no frills Slug’s Saloon, located on the Lower East Side. When not in trio mode, Green sat solo in a wooden chair center stage and wowed the audience with his stylistic virtuosity.

Sept. 18, The Grant Green Story, a documentary on the late jazz guitarist, will premiere in Theatre C of MIST Harlem (46 W. 116th St.), at 4:10 p.m., as part of the 11th annual Harlem International Film Festival. The film features many individuals he met while living and performing in New York, as well as in Detroit and St. Louis, cities that he once called home.

The film was made with the assistance of Grant Green Jr., youngest son of Grant (not to be confused with his brother Greg who plays guitar professionally under their father’s name). Sharony Green, who was married to Grant’s youngest son, is the film’s executive producer. Detroit-area filmmaker Charles Cirgenski assisted Sharony as a co-producer and co-director. Pre-production began in 1994. The film’s running time is 59 minutes.

Harlem in particular has meaning because Grant Green collapsed from a heart attack and died in this community in 1979. He was taken to Harlem Hospital. The film’s showing in Harlem showcases his life and legacy as coming full circle.

Dee Dee Bridgewater is one of the most dynamic female singers on today’s scene. You could call her a jazz vocalist, but that would be musical discrimination. She swings the rainbow bedazzled with humor and sassiness.

Her repertoire will travel through 100 years of jazz song. She will open with the ensemble of director/trumpeter Riley Mulherkar and vocalists Vuyo Sotashe and Brianna Thomas.

The following evening, the band will be led by music director/drummer Ulysses Owens Jr., and vocalists Theo Blackmann and Brooklyn’s own Alicia Olatuja, with the pianist Allyn Johnson, the bassist Larry Genadier and keyboardist David Rosenthal.

Sistas’ Place, the jazz oasis in the heart of Brooklyn, will begin its season Sept. 24, with the genre’s foremost arranger, bandleader and composer, the trumpeter Charles Tolliver. He will lead The New Charles Tolliver/MUSIC INC. quintet, with guitarist Bruce Edwards, pianist Theo Hill, bassist Essiet Essiet and drummer Lawrence Leathers.

In 1970, Tolliver released the now classic album “Music Inc.” on Strata-East, a record label he co-founded and then continued to tour with this MUSIC INC. band through the 1980s and 90s.

He continues to explore this musical legacy, as he unites multiple generations of jazz musicians under his visionary lead. Tolliver will pay tribute to John Coltrane at 80.

Tolliver’s shows are always sold out, so buy your tickets in advance: $25 per set.

The spread of gentrification throughout Brooklyn has blossomed with such venues as the Bric Music complex and National Sawdust, which are launch pads for emerging talent, as well as platforms for established artists. It is important to remember that before gentrification and these beautiful new venues, Sistas’ Place was in the heart of it all, enduring the storm. Sistas’ is more than a venue. It is a home (celebrating its 21st anniversary), where fans and friends go to bathe in this music called jazz that cleanses your soul and tingles your toes. Since 1995, Sistas’ Place has presented the best in jazz right in the community and this season will continue the tradition. It is Viola Plummer’s commitment to the music and the community.

Sistas’ Place is located at 456 Nostrand Ave. in Brooklyn. For further information, call 718-398-1766 or visit www.sistasplace.org.