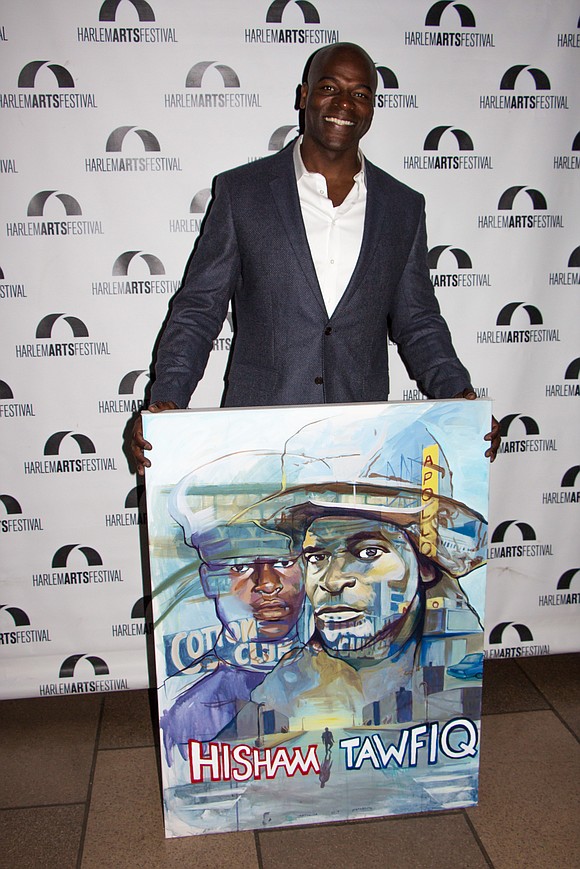 In the early 20th century, the Harlem Renaissance symbolized the awakening of a modern global consciousness of the African diasporic identity expressed through the arts. From the start, Harlem had always been a mecca for myriad types of artists from all over the world, and that still holds true. Six years ago, in recognition of the richness of Harlem’s culture and environs, three of its young artists created the nonprofit Harlem Arts Festival to enable the continuation of that tradition. Neal Ludevig, Chelsea Goding and J.J.El-Far got together to, as Goding said in the nonprofit’s Kickstarter video, “celebrate the artistic legacy of Harlem.” In doing so, they simultaneously perpetuate that legacy. Harlem today is just as reflective of a global artistic sensibility as it was so many years ago, and HAF’s coterie of artists is truly representative of contemporary Harlem.

The sixth annual Harlem Arts Festival gala was held at Riverside Church’s Assembly Hall March 30. A black-tie affair, it featured cocktails and dinner, harpist Brandee Younger, a music performance by The Kennedy Administration accompanied onstage by dancer Ernest Baker and a DJ for the end of night dance party. The gala kicked off the tail end of their season and is the ramp-up to the piece de la resistance, the actual festival that takes place annually in Marcus Garvey Park and its immediate vicinity the last weekend of June. It is free and open to the public and features dance music, spoken word, painting, art installations, discussion panels, forums and food. The idea is to link Harlem’s history as one of New York City’s historic centers for art rooted in the African diaspora with its present identity as a hub for diverse creatives.

For the organization’s Executive Director Neal Ludevig, himself an accomplished pianist, saxophonist and singer who describes himself as “being fueled by music and fueled by the arts,” a sense of frustration as well as perceived opportunity prompted him to form the Harlem Arts Festival when J.J. El-Far first came to him with the idea. “I worked in booking and in management with a lot of artists that actually live here but would go downtown, Brooklyn and everywhere else to perform, and I think, especially living here, it didn’t make sense. You should be able to perform in your own community for your own community.” The importance of organizations such as HAF that also function as a beacon for tourism cannot be underestimated. Curtis Archer, president of the Harlem Community Development Corporation, emphasized this in his remarks to gala attendees, commenting, “I give major props to the whole Harlem Arts Festival team. I saw their vision of really supporting the arts and its promotion in the greater Harlem community. Not only Harlem-grown artists, but also artists from the diaspora. This is what they promote; this is why they are successful. What they have been able to do successfully is tie arts and culture to tourism. This is why the Harlem Community Development Corporation got behind them from day one. ”

Besides absolutely incredible music, the highlight of the evening was the awards presentation. The Lynette Velasco Community Impact Award is presented annually to someone who embodies a commitment to community. That person is presented with a piece of art created by an HFA artist. This year’s recipient was actor Hisham Tawfiq of NBC’s “Blacklist.” After accepting his painting by artist Marthalia Matarrita, he remarked, “To receive the award was a shock. Very surprising but truly heartwarming, you know, growing up, born and raised in Harlem and being recognized by your community—you can’t ask for anything better than that.”