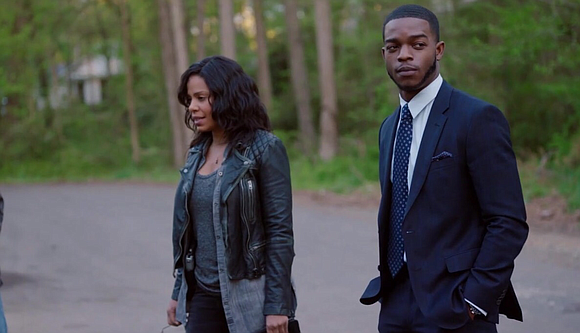 If you are a native of the Bronx, you’re quite familiar with the expression, “Shots fired!” and the actions associated with it. Those words are probably the leading reasons for jams in the park being shut down. Those memories lay side by side with all the frantic, chaotic, memories of early hip-hop.

Some other events associated with that expression had much more dire consequences for the people involved. Aside from the those who didn’t make the news, a few whose actions and fates affected the borough were Bernhard Goetz, because the four victims of the wayward vigilante called the Bronx home, Elinor Bumpers, Amadou Diallo and Larry Davis, who was on both ends.

If you quizzed actor, writer, producer Reggie Rock Bythewood on any of the subjects mentioned, I’m certain you’ll get an affirmative acknowledgement. Then you’d probably think that alone would be an inspiration for his latest endeavor. Could be. But when you reach a certain level of achievement, those memories help shape your resolve and remind you of just how far you’ve come. Having the responsibility of fatherhood, however, provides a different perspective.

Bythewood shared, “I watched the George Zimmerman trial with our oldest boy, who was 12 at the time, and when George Zimmerman was found not guilty, our kid was stunned and he cried. And instead of us consoling him, I pulled out the laptop and we showed him a documentary on Emmett Till on YouTube, and it really gave him the historical context for what was happening. We had a discussion of how the criminal justice system works and in some cases not work. He ended up writing a cool short story, where Trayvon Martin was going to have a visit with Emmett Till, which ended up being in hour five of the show. It was events like that that really rocked us and led to a lot of family discussion.”

Those discussions led to the show that he spoke of entitled “Shots Fired.” It’s been about a month since Fox Television debuted the first hour of the 10-hour movie, which the Bythewoods (Reggie and his wife Gina Prince-Bythewood) have been quick to differentiate from a TV series, and the film, which had a fire start, has been picking up.

Of course, all eyes are glued on the work of the all-star cast: Sanaa Lathan and Stephan James as Investigator Ashe Akino and Special Prosecutor Preston Terry, respectively, and Helen Hunt, Richard Dreyfuss, Jill Hennessy, Stephen Moyer, Will Patton, Mack Wilds, Aisha Hinds and DeWanda Wise, but the work of the writers and revolving directors are all to be commended.

Special kudos to the music supervisor Jabari Ali. E 40 music (“Choices”) on a prime-time national platform? Yep! Ever thought that we were gonna see it? Nope! An official “Shots Fired” soundtrack is set to release via Def Jam Records, featuring original songs as well as unreleased joints interwoven in the film. Some participants said to be involved are BJ the Chicago Kid, Antonique Smith, the Hamiltones, Ruff Endz, Sunshine Anderson, Heather Victoria, Katlyn Nichol, Shiré and Marqus Clae.

So, with all things clicking, including the climate in the nation, we could indeed be optimistic that a quality television program is in our future. Although it hasn’t been etched in stone, the door hasn’t been closed either. Bythewood concluded, “It doesn’t leave anyone hanging. You’re going to know what happens and you’ll find out if there’s any indictments. The answers to the mystery will be solved. But if we chose to continue, we could. The set-up with Ashe and Preston and the D.O.J means we could deal with a tremendous amount of different cases. That could shift with the new regime, but maybe that’s something to deal with, as well.”

“Shots Fired” airs Wednesday nights on Fox. Catch it while you can.

Over and out. It’s Tribeca Film Festival time, so we gonna be on the frontline.