Colin Kaepernick feels the force of conservative NFL fan base 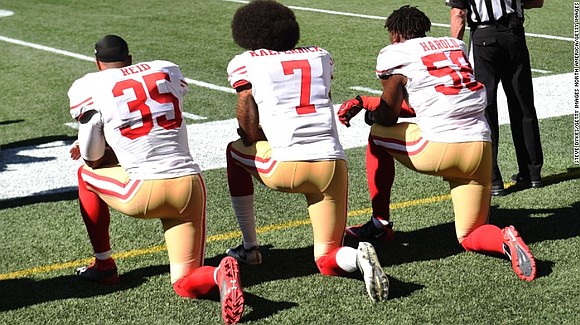 It is the second week of training camps across the NFL landscape and Colin Kaepernick remains unsigned. Frankly, Kaepernick is toxic to NFL owners, who fear backlash from the socially conservative sector of their fan base.

He entered near persona non grata status after carrying out a silent protest that first began during preseason in August of last year. The 29-year-old quarterback, who was drafted by the San Francisco 49ers in the second round in 2011, initially sat on the bench on the team’s sideline during the ceremonial presentation of the national anthem.

Ultimately, Kaepernick’s protest, which was the result of his exasperation brought on by police brutality against Black men and other social injustices, took the form of kneeling on the sidelines. Soon, more NFL players and professional athletes, inspired by Kaepernick, conducted various acts of silent protest while the national anthem blared through stadiums and arenas.

As NFL viewership declined 8 percent last season from the 2015 season, The J.D. Power Fan Experience Survey, comprising 9,200 sports fans, revealed that the No. 1 reason was player protests. Kaepernick became the face of the protests and many fans have sent letters and emails to sponsors in which they support threatening to severe ties with a team that signs Kaepernick.

While the evident ostracizing of Kaepernick does not constitute collusion, he is seemingly being blackballed by NFL executives. At a fan forum this past Sunday, Baltimore Ravens owner Steve Bisciotti, who appears to be reluctantly considering signing Kaepernick as a backup to starter Joe Flacco, said, “I hope we do what is best for the team and balance that with what is best for our fans.” He also admitted adding Kaepernick to the roster would “upset some people.”

Many of the people who would be upset are the hypocritical and duplicitous flag wavers seen at Donald Trump rallies. They are more offended and angered by a man kneeling in protest than an innocent Black man getting shot and killed by law enforcement officers. They pack stadiums and affect the multibillion dollar league’s revenue.

Kaepernick is better than well over half of the league’s backup quarterbacks and a handful of starters. Regardless of his ability, if owners believe it comes down to a choice between him and the fans, rest assured Kaepernick has taken his last snap for a National Football League team.