Malcolm X speaks in the era of Trump 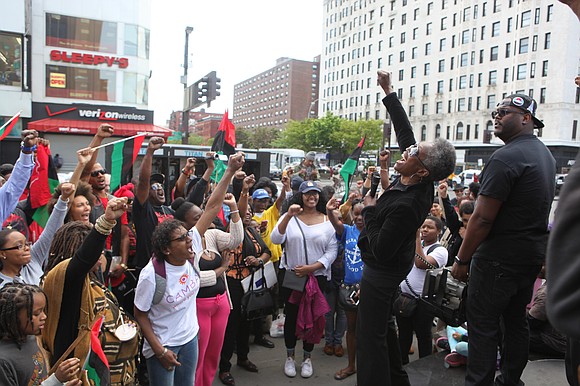 In the spirit of Black History Month, African-Americans are acknowledging their great leaders who paved the way to where they are now. From being a professional athlete to becoming a CEO of a company, there was a time in which Black people were unable to do such things simply because of the color of their skin.

Although some people don’t see the significance of Black History Month, it’s a great way for younger generations to be educated on how life was for Black people not too long ago. We had a grand and rich history centuries before the enslavement of Africans. We should learn about that history every month of the year, not just in February, the shortest month. Times are always changing. Black people are always aware of how events and politics can have an impact on us in very different ways, and so identifying and celebrating icons and heroes is always done to inspire and keep up a feeling of pride and hope.

And now that Americans have Donald Trump as president, African-Americans are very much aware of what may transpire in the next few years in regards to public policy, the criminal justice system, housing, education and the distribution of resources and essentials. Often people look for a leader, or reflect on those such as Marcus Mosiah Garvey, Harriet Tubman and Shirley Chisholm. One of the greatest civil rights leaders was Malcolm X. Feb. 21 will mark the 52nd anniversary of his assassination in the former Audubon Ballroom (now the Malcolm X/Betty Shabazz Center) in 1965. On that day, he was discussing his Organization of Afro-American Unity when he was gunned down by five men. Although the government’s Counter Intelligence Program, aka COINTELPRO, is still widely suspected of involvement in the plot, the assassins were reportedly members of the Nation of Islam, and they killed him because of his departure from the religious group. Malcolm X was known for being a fearless nationalist. Throughout his career, he spoke about the importance of having  unity and civil rights and the religious practices in our community. His life was cut short but his legacy lives on. For his birthday, May 19, New Yorkers travel upstate to visit his gravesite and pay respect.

Dozens of school buses and cars bring young people from New York City schools. Divine Allah, youth minister of the New Black Panther Party, told the Amsterdam News, “We have the young people brought to the joint burial site of Malcolm X and his wife Dr. Betty Shabazz so that they can understand the importance of these two tremendous icons. Malcolm is still with us. His legacy lives on. The young people must be taught this. We tell ourselves that no matter who is in the White House, our fight for total self-determination and liberation and equality goes on. Malcolm told us to do for self and fight for with the warrior spirit we were born with.”

To celebrate Malcolm X’s legacy, on Tuesday, Feb. 21, 2017, at 6:30 p.m., on the anniversary of his assassination, the December 12th Movement is presenting a program at Sistas’ Place, 456 Nostrand Ave. in Brooklyn titled, “Malcolm X Speaks in the Era of Trump.” The program will feature excerpts from “The Ballot or the Bullet,” and Malcolm X’s speech at the founding of the Organization of African-American Unity—and ask the question, “What we must do today to continue Malcolm’s legacy?” Call 718-398-1766 for more information.

Uptown, the Malcolm X/Betty Shabazz Center will be open on Feb. 21. Starting at 10 a.m., the center will be paying tribute to Malcolm X  through art. At 1 p.m., there will be a showing of the “Malcolm X” film, and from 6 p.m. to 7:30 p.m., a panel discussion will take place. This tribute is open to anyone. The Malcolm X and Dr. Betty Shabazz Memorial and Educational Center is located in Washington Heights, Manhattan. For any more information about the Shabazz Center or the event, please go to http://www.theshabazzcenter.net/page/the_shabazz_center.html

Between March 17 and March 26, 2017, the New Victory Theater will present the play “X: Or, Betty Shabazz v. The Nation.” PEN/Laura Pels Award winner Marcus Gardley wrote the play, which is set in the courtroom after the assassination of Malcolm X.  As the cast is going over the case, the audience goes down a memory lane of  Malcolm X’s life.