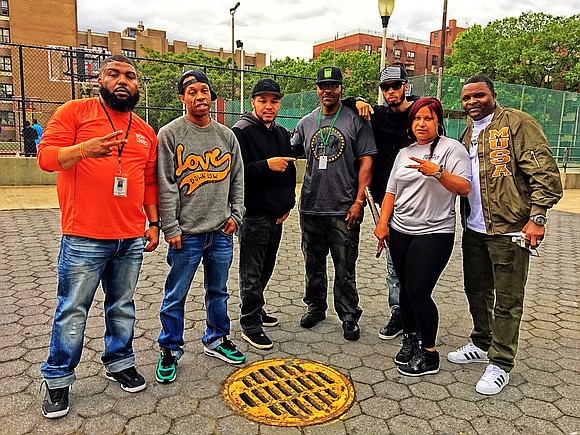 June is Gun Awareness Month, highlighting the sharp increase in firearm fatalities and survivors. More than a dozen New York City-based “stop the violence” groups and trained violence interrupters are working toward what they are touting as a “Summer of Peace.”

“With the Summer of Peace, our goal is to host many outside events where our community can enjoy themselves safely,” said veteran Cure the Violence advocate A.T. Mitchell. “We want to accentuate the positive, because the mainstream media only usually shows the negative. The Summer of Peace began June 1, 2017, on the first day of the Gun Violence Awareness Month. It is an extension of that effort to last beyond the month of June ‘til the end of summer; and even then our work continues until the beginning of school and beyond.”

“On any given day, approximately 88 Americans are killed by gun violence” stated Gun Violence Awareness Month proponent Tamika Mallory. “June marks the beginning of summer and as things heat up, gun violence typically escalates, impacting New Yorkers throughout the state of all ages, races and genders. Common sense gun laws dramatically reduce deaths from gun violence. Yet even in states like New York, which has the third lowest gun death rate in the country, the number far exceeds other industrialized nations in the world.”

It is perhaps typical of the times that a year without a shooting death in a part of Brooklyn depicted as a hot zone is celebrated with a gusto usually reserved for cultural celebrations. Saturday, May 27, 2017, East New Yorkers took over The Big Park, aka Alabama Park, to do just that.

“We want to increase the peace and have a 2017 Summer of Peace,” said Mitchell, Man Up Inc., USA founder and executive director. “That title is exactly what it sounds like. This Saturday out in East New York, we celebrated over 365 days in one of the catchment areas—where no one was killed by gun violence. We attribute this to our collective work and responsibility of—indeed—Ujima. We strive to apply the principles of the Nguzo Saba of Kwanzaa on a daily basis, not just at the end of the year. We want to reduce violence and gun related crime year round.”

“Gun Violence Awareness Month was created in an effort to raise awareness surrounding the issue of needless and senseless gun violence in New York's communities. By furthering the dialogue with local, state and federal partners, advocates are able to examine the causes of gun violence and create meaningful solutions in an effort to prevent violence. On June 2, Mayor Bill de Blasio will light City Hall orange in honor of the day.”

As well as violence interruption, mediation and mentorship, Mitchell said that this Summer of Peace will represent community-friendly events such as outdoor movies, barbeques, street festivals, basketball games and tournaments. “We are going to make sure that every event is peaceful, because we have men and women on the ground who are trained to mediate conflicts and recognize incidents before they escalate,” stated Mitchell. “The goal is to have a summer full of peaceful events and activities to offset the negativity of summer violence with positive activities throughout the city. We have been doing this work for a very long time, but summer is the busiest time of year for us working in Crisis Management Systems such as Man Up Inc., SOS Bed-Stuy, Rock Safe Streets in Far Rockaway, Fathers Alive in the Hood, Bronx Connect, Release the Grip, Staten Island’s True 2 Life, Erica Ford’s Life Camp Inc., SAVE East Harlem and Harlem’s Street Corner Resources. These are organizations trained in the Cure Violence model that is part of the Crisis Management System in New York.”

The Summer of Peace collective stated, “This annual concentrated effort seeks to heighten attention to gun violence and gun safety not only for victims or families of victims who have endured such pain, but also to ensure we are seeking proactive measures to rid our societies of gun activity.”

Mitchell spoke directly to the targeted youth, who may be “in the life.” Talking to the Amsterdam News, the Brooklyn-based activist said, “My message to the community of misguided individuals who we work diligently and hard to reach before they pull the triggers:

“I would first and foremost like to publicly thank you brothers and sisters for your cooperation and participation with our 16 citywide Crisis Management System, Cure Violence organizations. Without your partnership and mutual respect, we would not, as a city, be currently enjoying record lows in reported gun related violent shootings and homicides.

“As a community, we are listening and learning more and more from you every single day. Our goal is to reach you and provide you with the necessary resources that you have been begging and deserving of for years and years.”

The Chairman of Community Board 5 added, “As we continue to advocate and provide services tailored for you, we are also appealing to you all for a fair exchange. As we say in the streets, ‘fair exchange is not a robbery.’ For our relentless dedication to you, we are respectfully asking for a Summer of Peace in exchange. Let’s make the summer of 2017 the safest and most peaceful summer of all. Work alongside of us to help make it safe and peaceful for every community in this city. For every neighborhood that is planning for activities and events for all members of our communities to enjoy. This summer lets work together to create ‘Summer of Peace Zones’ around playgrounds, ball courts, parks and streets where our children, elders and innocent members of our families work, play and live.

Most importantly, always remember that not every community in this society has given up on you. There is more love and support for all of you, than there is hate.”

The youth can always reach out to him, Mitchell said, by phone, social media, website or coming to any one of the several planned events.

Having perfected the art of trusted delegation, Mitchell has dozens of like-minded colleagues who work in the offices, schools, community centers and on the streets.

As his work has diversified to prevent fights from becoming physical or fatal, he and his associates have emphasized the need to prevent the initial hostile contact between law enforcement and filter-free youthful exuberance.

“Another major portion of the Summer of Peace series is our #10,000 Free voter registration and education campaign,” Mitchell said. “It is our goal that we will register 10,000 people this summer alongside the numerous activities and events we will be hosting. We are primarily focusing on empowering the disenfranchised members of our community, like people who are returning citizens from prison, college and the military. It is our collective citywide goal to have at least 10,000 or more people registered and freed to vote in the upcoming citywide elections by the end of this summer. Coupled with this effort will be a massive public education campaign on local politics hosted by the political education organization that I am a proud partner in call Hip-Hop Organized, or H2O. We will couple the elements of hip-hop with voter education drives as well as in our political education classes. So there will be DJs playing music, MCs and poets, hip-hop and breakdancing all summer long in public spaces and places.”