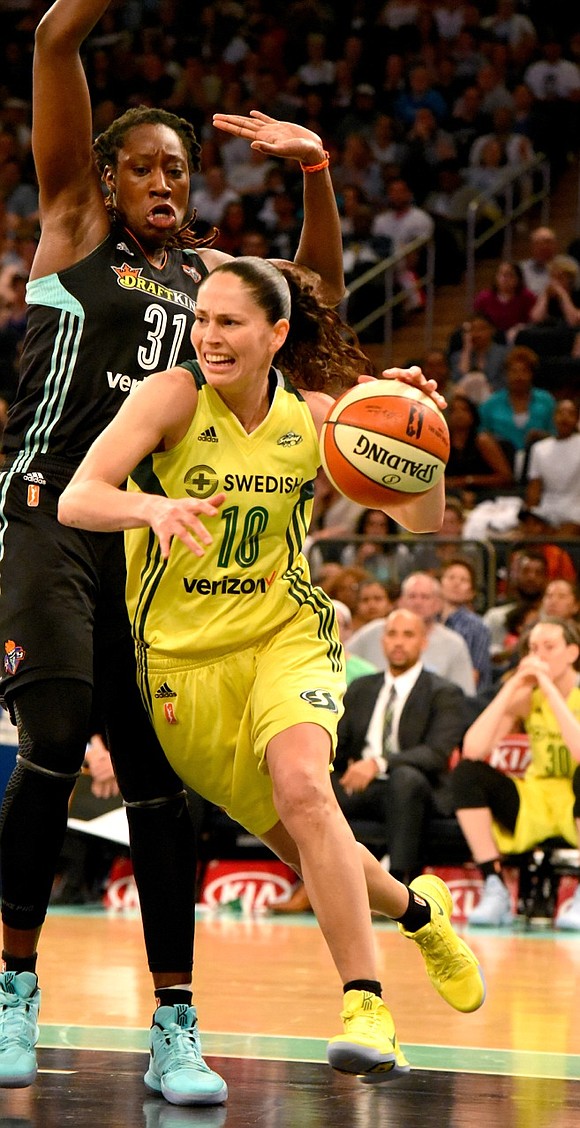 The New York Liberty came out explosive against the Seattle Storm, but Sunday’s 94-86 win proved no easy romp. After an early lead, the Liberty was ahead by just three points at the half, and the Storm edged ahead in the third quarter. But New York was not having it as starters Tina Charles, Sugar Rodgers, Shavonte Zellous, Kiah Stokes and Bria Hartley kept on the pressure aided by rookie forward Nayo Raincock-Ekunwe, who contributed 10 points and six rebounds.

“They’re playing together; they’re understanding themselves; they’re learning and getting better every day,” said coach Bill Laimbeer. “We still have a long way to go, obviously. We have a lot of room for improvement, individually and collectively, but they’re playing well with each other.

“Every player on the team is putting on their concentration cap when they come to work every day and it’s showing,” he added. “We’re now experiencing a good mental stretch of playing basketball.”

Raincock-Ekunwe is starting to feel at ease with the high level of WNBA play and is seeing the rewards of relentless hard work in practice. “I’m confident coming off the bench now,” she said. “I know my role on this team. That’s to go in, rebound, work hard, run the floor.”

Guard Lindsay Allen is making the most of a second opportunity. The Liberty’s top draft pick, she was cut at the end of training camp but picked up during Epiphanny Prince’s absence.

“We talk about fighting through adversity and staying the course,” said Allen, who had five points and an assist in the win over the Storm. “We had some times in the game today where things weren’t going our way; we weren’t making shots. We really dug down deep…and kept doing what we do as a ball club.”

It wasn’t Stokes’ best game of the four wins, but she still scored and rebounded at the most crucial moments in the Storm game. “We had to grind out this game,” she said. “People stepped up at different times. That’s how we ended up overcoming their runs…and eventually winning the game.”

With the win over Seattle, the Liberty moved to 6-3, third in the WNBA standings. The team is on the road for two games before returning to the Garden June 23.