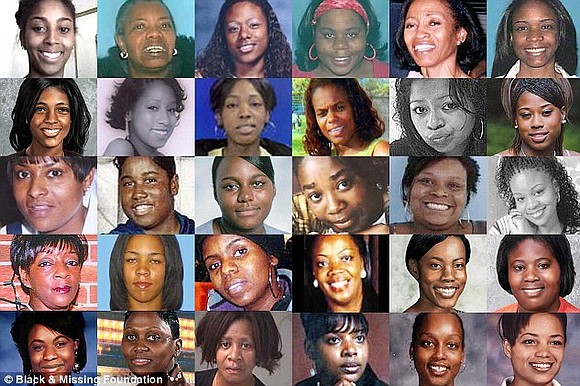 “The epidemic of sex trafficking in young girls throughout the nation is very high, including New York City,” charged youth activist Erica Ford. “Young girls are being sold and used as sex objects. A lot of it is happening locally. I know in New York—in Jamaica, Queens—that they have abandoned houses that they use to house the girls. And they bring in men and use these girls as prostitutes and sex objects. It is horrific.”

As Women’s History Month draws to a close, the recent perceived uptick in the number of missing Black females is causing major concern within the national Black community. With a reported 10-plus young females going missing in the Washington, D.C. area in the past two weeks, Black folk are asking why the national Amber Alert was not issued in any of the cases.

On the other hand, the case of the 15-year-old white girl who reportedly ran off with or was taken by her 50-year-old teacher is getting major coverage in the mainstream media. The racial disparity is not going unnoticed by Black lay folk and activists alike.

Rio Amun posted on Facebook a picture asking, “Amber Alert: Did people receive one for all the missing Black Girls in D.C. Or is there something wrong with just my phone?” Other irate observers are simply requesting the reaction of an “Ebony Alert, since Amber is not including us at present.”

Another alert doing the rounds on social media is a warning that an ad announcing, “Real opportunity to earn serious money. ... No experience required ... Paid vacations ... Benefits ... For more information or confidential interview please call...” is a trap to lure young women. @theankhlife stated, “DC. This is a fake employment ad that’s being passed out to young women as a ploy to get them alone. Spread the word.”

The AmNews reached out to D.C. metropolitan police but received no response by press time.

The NYPD responded to the AmNews request for the stats regarding missing children and youth in the NYC area, with the statement, “The number of missing persons is fluid.”

Working with the Human Trafficking Unit, acting Brooklyn District Attorney Eric Gonzalez announced that an East New York man, his girlfriend and another woman were charged in a 24-count indictment with promoting three underage girls as prostitutes. Gonzalez said, “These defendants allegedly profited off three troubled and vulnerable young women.”

Gonzalez identified the defendants as Keisia Atkins, 29, Mercedes Jones, 19, and Whetsel Wade, 45, all of East New York, Brooklyn. They are variously charged with second-, third- and fourth-degree promoting prostitution and related charges.

Gonzalez said, “Between August 2016 and November 2016, Wade promoted the 13-, 15- and 17-year-old girls as prostitutes, posting photos of them on [a classified ads website], alongside advertisements for escorts. The defendant would then allegedly drive the minors to hotels or private apartments to meet men who paid to have sex with them. In some instances, the defendant would have the Johns come to his home on Crescent Street in East New York to have sex with the girls in his living room.”

Noting that as the overly exposed (by design) outrageous pimp culture saturates certain music videos, film and language, Ford slammed the promotion of a subculture that co-signs the abuse of women and young girls.

Last November, Sen. Jesse Hamilton and documentary filmmaker Danielle Rose hosted a screening of the award-winning documentary “In Our Backyard” in Park Slope. Hamilton said, “Too often, sex trafficking is identified as happening somewhere else; some distant land is suggested as the site of concern, not here. ‘In Our Backyard’ refutes that damaging myth. This documentary brings into focus the nearness of this crime. That proximity deserves our attention. Alongside experts and advocates, brave survivors share their experiences. We see vividly the urgent need to combat this crime, to shut down the people perpetrating this exploitation, and the need to challenge a culture of misogyny that enables these crimes. And while there is no single easy solution, we can chart a way forward that takes on board the insights survivors bring, and pull together a coalition dedicated to confronting both those crimes happening out there in the wider world, and also too, those crimes that are happening right here at home.”

Anti-child abuse and anti-sex trafficking activists have worked for years from the U.S., to India, to Russia, to the U.K., to the Middle East, to bust international rings and alert the public to this devastating practice. International anti-sex trafficking and anti-slavery activist lawyer Evon Idahosa, founder of Pathfinders Justice Initiative, has reported extensively on sex trafficking in Nigeria and devoted her career to rescuing and trying to rehabilitate survivors. She said, “The souls and bodies of women are turned into commodities for financial gain while the survivors themselves are held in debt bondage, severely abused, starved, tortured or infected with various sexually transmitted diseases ... Others who are victims of organ trafficking are murdered and never make their way back home.  The survivors whose lives tenuously hinge on the margins of poverty and abuse, yet who summon up the courage to resist the brutal annihilation of their souls, are the women and girls we are honored to serve.”

National Black United Front’s Salim Adofo posted #ProtectBlackKids to announce a Wednesday, March 29, multiorganization interfaith candlelit prayer vigil at the African Civil War Memorial. He issued a “call to action in support of the families locally and nationally that have been are missing family members and friends.”

The announcement continued, “NBUF will also discuss with the community its family safety and action plan to prevent someone from being abducted. The plan will also include steps to take in case a family member or friend is determined to be missing.”

Adofo noted, “According to the National Crime Information Center, there are 170,899 missing Black children under 18 in the United States. This is more than any other category except for the white/Hispanic. They combined for 264,443. Currently there are 38 missing person cases that are active in Washington open according to Metropolitan Police Department. Many fear that there is a possibility that some of the missing individuals could be victims of human trafficking. Per the U.S. State Department, 600,000 to 800,000 people are trafficked across international borders every year, of which 80 percent are female and half are children.”

This weekend Hawk Newsome of Black Lies Matter in New York City posted on social media, “#Black Girls Missing—Take a stand against the attacks on Black and Brown girls. Help find the missing girls in D.C. We urge you to call the Congressional Black Caucus—202-226-9776—Request an Amber Alert; Civil Rights Department of Justice 202-514-4609. This is a civil rights issue, this is a Black Lives Matter issue. Don’t stay silent. Find our girls.”

The internet and Black Twitter was awash with demands to first recognize that a serious issue exists, and then demanded that law enforcement launch a serious search for these young teens. The roots_collective was among the many stating that “64,000 Black women are missing in the U.S.”

Saturday, a group calling themselves Black Men United called on “Black Males, Street Patrol; Protecting the Black Queens of DC,” to gather at the Navy Yard Metro Station to spread the word and watch out for young Black women.

Congressional Black Caucus Chairman Cedric Richmond and Rep. Eleanor Holmes Norton of the District of Columbia called on Comey and Sessions to “devote the resources necessary to determine whether these developments are an anomaly or whether they are indicative of an underlying trend that must be addressed.”

D.C. cops insisted that there has been no uptick in the numbers of missing persons since the beginning of 2017. Metropolitan Police spokeswoman Rachel Reid told The Associated Press, “We’ve just been posting them on social media more often.”

Holmes Norton said that she will introduce legislation to require the U.S. Department of Justice’s Office of Juvenile Justice and Delinquency Prevention to collect and publish broad demographic characteristics, including race, gender, sexual orientation and gender identity, of missing children.

“Congress has long recognized that missing children is a national problem,” Holmes Norton said.  “In 2013, Congress required the Department of Justice to conduct, every three years, national incidence studies of missing children. Such a study is now underway. However, my bill would require the Department of Justice’s Office of Juvenile Justice and Delinquency Prevention to collect, break down and publish demographic subsets of these missing children.  It is critical that the public know if there is a disproportionate number of missing children of color, particularly missing girls of color, which we believe is an underreported national problem. Experts need to first measure the incidences, and then study whether children have been trafficked, abducted, are running away, or are missing for other reasons, and what they recommend we can do about it.”

In February, New York Congresswoman Carolyn B. Maloney and Texas Congressman Ted Poe renewed their efforts to give the federal government more funding and resources to go after pimps and traffickers with the reintroduction of the Human Trafficking Fraud Enforcement Act. The legislation gives the Internal Revenue Service more resources to target pimps and traffickers for taxable income, and provides financial assistance and whistleblower protections to survivors.

“Modern day slavery is happening here, on our shores, and we must do everything we can to stop it,” said Maloney. “Pimps and traffickers are holding women captive, degrading their humanity and selling victims and their bodies over and over again. We must use every tool possible, including the IRS, to take down traffickers, who have often proven elusive to apprehend and prosecute. This bill will target the real criminals, those involved in the promotion of commercial sex acts—pimps and traffickers—and exploited persons in prostitution.”