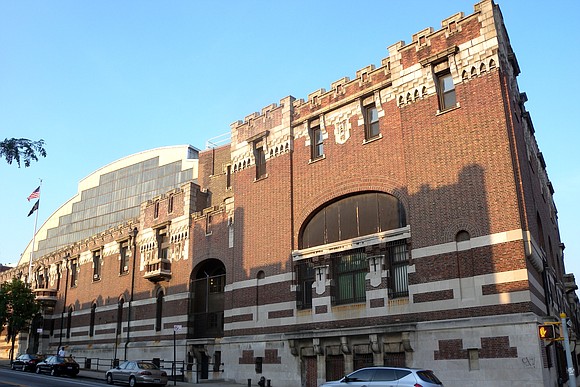 A spokeswoman for NYC Communities for Change said that protests will continue Nov. 2 at 250 Broadway in front of the Manhattan office for Councilmember Laurie Cumbo (D) whose district includes Fort Greene, Clinton Hill and Prospect Heights.

Activists argue that the ball is now in Cumbo’s court after the NYC Planning Commission on Oct. 30 voted 11-1 in favor of the redevelopment plan for the Bedford-Union Armory located at 1579 Bedford Ave. Two people were arrested at the CPB meeting. According to sources, 50 protesters were present.

According to community organizer Derek Perkinson, the position of the Black Institute, a progressive think-tank founded by longtime activist Bertha Lewis, is that the community is not giving in to pressure from Mayor Bill de Blasio and the CPB to build luxury condominiums on the site. “We are really passionate about our position,” he emphasized. Perkinson said that activists have been following the mayor to the YMCA where he exercises in the morning. The Black Institute believes there can be a compromise worked out, possibly 50/50, but not the plan that is being floated at this time, Perkinson said.

The current plan calls for 67 affordable units of housing with rents between $775 and $979 which amounts to 20 percent of total units, allowing the development to conform to the 80/20 housing program, which offers tax exemptions for the developers. A total of 99 units would be priced at $2,203 a month, with 164 listed at $3,700 a month.

“As it relates to the recent CPB ruling, I believe we can do a whole lot better even under the original RFP [Request for Proposal],” Assemblyman Walter T. Mosley (D) said. Mosley serves as a district leader for the 57th Assembly District, representing Fort Greene, Clinton Hill, Prospect Heights and parts of Bedford Stuyvesant and Crown Heights.

In October 2016, Mosley, NY State Sen. Jesse Hamilton (D), Assemblywoman Diana Richardson (D) and Congresswoman Yvette Clarke (D) sent a letter to the powers that be in NYC stating, “Our concerns with the proposed project outweigh the supposed good that the project does in the community. Public land is a public resource, and we only have one chance to get this project correct.”

De Blasio told Politico New York shortly after the September primary election won by Cumbo that he would spend more funds to expand affordable housing on the site. “In the end, we’re going to work with the council member to see if there is a way to improve the project that would win her support and be more comfortable for the community,” de Blasio was quoted as saying.

The city is leasing the block-long vacant armory to developer BFC Partners at a starting rent of $2 million per year for a 99-year term. Sam Spokony, a spokesman for BFC Partners, in an email message said, “We’re committed to providing a new affordable recreation center, affordable office space for nonprofits and affordable housing for the Crown Heights community. As the Bedford-Union Armory continues to sit vacant, this is an opportunity to make it a place that truly serves local families.”

Some observers say that the major problem with the plan is the 56 condos—44 of which would be sold at market rates. The other 12 would be sold to people earning up to 120 percent of the area median income of $85,900 for a family of three, according to Politico. “No condos,” stated Mosley.

A source, speaking anonymously and familiar with Cumbo, stated emphatically that the council member will vote against the project when it comes to the City Council.