‘A Raisin in the Sun’ shines at Harlem Repertory Theatre 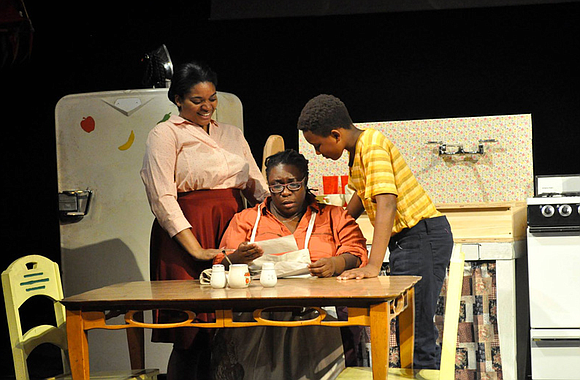 "Raisin In The Sun" at the Harlem Repertory Theatre

I always get excited when I hear that Harlem Repertory Theatre is doing a production. I don’t think I’ve ever seen a production there that wasn’t poignant and moving. They are currently presenting Lorraine Hansberry’s “A Raisin in the Sun,” at 240 E. 123rd St. at Second Avenue.

Hansberry’s work is timeless and captivating as we watch the lives of the Youngers, a family of hardworking Black people struggling to survive and hoping for a better life when a $10,000 insurance check is expected after the death of Walter Lee Younger Sr., the patriarch of the family.

The production has a phenomenal cast. Amanda Hargrove is powerful and captivating, while also being a sympathetic character as she brilliantly takes on the lead role of the matriarch, Lena Younger. She is a woman with wisdom, love and old-fashioned values. She is a woman who, like many parents, doesn’t see eye to eye with her children. Mario C. Brown is riveting as Walter Lee Younger. He approaches the role with a frustration and an aggression that grab one’s attention. Kyria Geneva is perfectly cast as Ruth Younger, and the emotional rollercoaster she rides between Lena and Walter Lee is one she takes the audience on with her. Yanece Cotto has a spunkiness and fire to her portrayal of Beneatha, Walter Lee’s younger sister who is studying to be a doctor. Beneatha is someone who is trying to find her identity, but she is also very opinionated and not shy about sharing her thoughts. Cotto demonstrates the character’s multiple layers. Dexter Thomas-Payne is delightful as Asagia, the Nigerian student interested in Beneatha. His character is passionate but also wise. A.J. Acevedo is entertaining to watch as rich, shallow George Murchinson. Michael Joseph Whitten gives a memorable performance as Karl Linder, the white man from the welcoming committee, coming to let the Youngers know they are not welcome. Michael Brown-Taveras is capable as Travis, Walter Lee and Ruth’s son.

This play inspires you when you look at the struggles and conflicts present in this family’s life. Hansberry just has a great way with words. And Keith Lee Grant, the director, has a way with mounting a show. He does something very interesting in the staging of the play. Although there is a physical set of the Youngers’ living room, the actors at times are physically in the audience—on the steps or in the seats, but are still in the Youngers’ living room according to the director. Grant did not want to just limit the presentation to the small setting in front of everyone. Watching the play this way made me a bit uncomfortable at first, but Grant explains what he is doing and why he is doing it in the playbill. In this case the playbill was definitely a necessary item to look through.

This production is mesmerizing, moving and exciting to watch—there are explosive moments that will touch your heart and moments that will fill you with pride. You need to go see “A Raisin in the Sun.” For ticket information, go to www.harlemrepertorytheatre.com. The production will run Sept. 2, Sept. 16 and Oct. 14. Other productions being presented by Harlem Repertory Theatre at the same location are “In The Heights,” Aug. 26, “The Wizard Of Oz,” Aug. 20, and “Jamaica,” Sept. 9, Sept. 23, Oct. 7, Oct. 21 and Nov. 11 and 25.