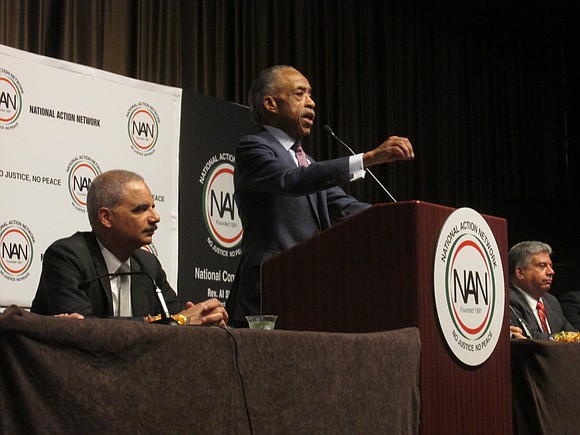 This year’s convention is focused on the progress Black Americans have made since King’s assassination 50 years ago. The convention is also focusing on fighting against the many policies that have come out of President Donald Trump’s administration.

“In this year that we make a half-century since King, it is up to us to keep the dream alive and preserve what was won in civil rights voting rights,” Sharpton said. “The two seminal figures that no one could ignore in history from our community have been Dr. King and President Barack Obama. This organization is unequivocally and unapologetically going to fight this administration on the King legacy and the Obama administration.”

In a video message, Obama greeted convention attendees with well wishes of a fulfilling event.

“[Dr. King’s] example inspired generations of Americans to never be trapped by what is but to always push for what ought to be,” the former U.S. president said. “That’s what you all are doing at the National Action Network. Fighting to ensure equal access to jobs, to justice, to education and to ballot, especially when it’s hard.” The annual Keepers of the Dream Awards took place in the evening, commemorating the death of Dr. Martin Luther King Jr. This year’s honorees include the Rev. A.R. Bernard of the Christian Cultural Center, rapper Common, Essence owner Richelieu Dennis and MSNBC host Joy-Ann Reid.

Each day of the NAN convention there was be a hackathon and technology competition, and each evening there will be revivals featuring leading national preachers. Many of the nation’s top activists, political strategists and leading academics are attending the convention to create an action plan for a civil rights agenda under the Trump administration. Participants addressed additional key issues such as media transparency, labor unions and activism. One notable session at the convention will be the Women’s Power Luncheon, hosted by CEO of IMPACT Angela Rye. Honorees included founder and director of BLACK GIRLS ROCK, Beverly Bond, CBS News Correspondent Michelle Miller and television and Sirius XM host Bevy Smith.

The NAN Convention is also addressing the #MeToo movement with several discussions about sexual harassment and assault. A workshop scheduled for Thursday presented by NAN national membership director Dominique Sharpton-Bright and Twinbiz CEO Yvette Heyliger will highlight awareness through testimony and prevention.

Tylik McMillan, president of NAN’s NCAT Chapter, will present a panel discussion on sexual assault and harassment in the Black community. The convention is free and open to the public; however, some events require tickets. For more information, go to www.nationalactionnetwork.net.