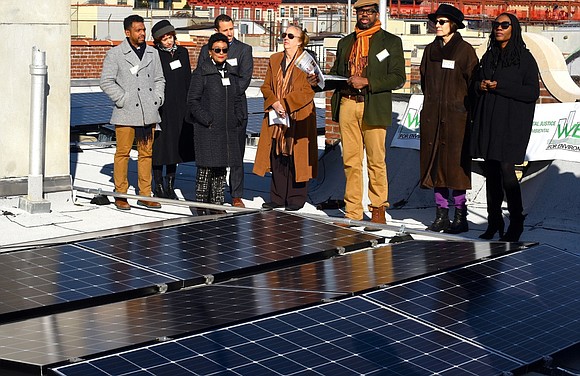 It was a chilly December morning, but everyone on the rooftop of 128 W. 138th Street gathered to give thanks to the sun as installation of solar panels marked the local fight against climate change.

Members of We Act for Environmental Justice, Solar One, Urban Homesteading Assistance Board and building residents gathered Wednesday morning for a news conference celebrating the installation of rooftop solar panels on the building.

The building is part of a program involving the installation of rooftop solar panels on nine Housing Development Fund Corporation affordable housing co-ops in Harlem and Washington Heights (and two installations on market-rate buildings). Eleven buildings would be fitted with the panels under this joint program known as Solar Uptown Now, or S.U.N.

“We’re actually celebrating the idea of the sun,” said We Act Deputy Director/Director Cecil Corbin-Mark. “Even though it 30-something degrees out here, it may not feel like there’s a lot of sun, that big body up there is powering what we’re doing here.”

Once the entire project is completed, We Act officials believe the solar installations will offset close to 4,117 tons of greenhouse gas emissions over their 25-year life span, reduce the local carbon footprint and help combat climate change. Officials say it will also reduce demand for electricity from local power plants, reducing air pollution in the process.

Juan Parra of Solar One said organizations such as his want the growth of solar energy to include everyone and not just those who can afford it.

According to officials, the S.U.N. installations will produce power for building common areas (hallways, elevators and laundry/common rooms) and reduce operating expenses for the co-ops leading to savings in bills for residents. The savings would allow the participating buildings to reallocate funds for building maintenance and reserves.

Parra said S.U.N. accomplishes all of that by providing affordable housing residents interested in going solar with technical assistance and providing them with information, resources and guidance. The goal is to get them from the point of learning about what solar energy is to Wednesday’s ceremony celebrating the installation of panels.

“We really want to see the conversation around tackling climate change expand to all New Yorkers,” said Parra.

Another benefit of the program, according to those involved, is green jobs for local residents.

We Act officials said through funding from the New York State Department of Labor, they have been providing free worker training since 2012 and started offering free solar installation training this year with Solar One as part of the program. We Act members and the community members mandated that the installer, Grid City Energy, hire local trainees for the program.

Manhattan Borough President Gale Brewer praised everyone for getting the job done when bureaucracies would have gotten in the way.

“There’s a lot of challenges in New York City,” said Brewer. “For somebody like me who sees what works and what doesn’t work, this works. In Washington, they lie taking over offices and talking about renewable energy and blah blah blah, and guess what? You’re doing it. Blah blah blah on all sides in Washington ... and you’re actually completing the project.”

Brewer continued, “The City Council and I was there for 12 years, so I’m very familiar with it, want to talk about changing the way buildings do their energy efficiency, which is a good thing. I laugh because I did the same damn thing 12 years ago with the Bloomberg administration. You guys are here just doing it.”