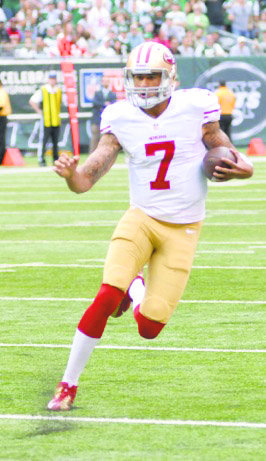 The 49ers’ Colin Kaepernick can win the battle with his arm or by running the ball. Russell Wilson, the Seahawks’ second-year quarterback, is seeking his first Super Bowl title

“Now in my younger days I used to sport a shag

When I went to school I carried a lunch bag

Always got mad when the class was dismissed.”

The opening verse of “Passin’ Me By” was first sung and rapped by the hip-hop group The Pharcyde long before Colin Kaepernick knelt on the San Francisco 49ers sideline in demonstration of social injustices, specifically police shootings of Black men.

Yet the lyrics, deconstructed and interpreted in abstract form, apply to the quarterback’s past and present NFL football journey. In Kaepernick’s younger days, wearing his hair much shorter than his now iconic afro, he led the 49ers to the Super Bowl in the 2012 season—in which they lost to the Baltimore Ravens—and the NFC Championship Game one year later.

The vast NFL fan base viewed him as an up-and-coming, multiracial, non-threatening star who carried a proverbial apple to practice for his head coach Jim Harbaugh. But class was dismissed for Kaepernick in March 2017, when he opted out of the final year of his contract with the 49ers, seven months after first initiating what would rapidly become a global symbol of opposition to social injustices.

Kaepernick has not worn an NFL uniform since because team owners keep passing him by. In their eyes he’s radioactive, much more of a public relations and optics risk than players who abuse women. That in and of itself speaks to the current political climate in the United States, a time during which the billionaires boys club fears backlash from Donald Trump’s base, roughly 35 percent of the electorate, who will forgive and tolerate women beaters but spew hate for men simply exercising their First Amendment rights.

It’s the shut up and just play ball vitriol of bigots and racists that has kept the 31-year-old Kaepernick off of every one of the league’s 32-team rosters for two seasons and counting. Last Thursday, Virginia Lt. Governor Justin Fairfax, who is African-American, voiced his position on the issue, saying, “I have grave concerns about the way that [Kaepernick] has been treated.”

His comments came after Washington, which was crushed by the Giants 40-16 last Sunday, lost its starting QB and primary backup to season-ending injuries yet never seriously considered signing Kaepernick.

“We talk about the First Amendment. We talk about the opportunity to express yourself,” continued Fairfax. “It’s hard to believe that protesting police brutality and the shooting and killing of unarmed people, primarily unarmed African-Americans, that that’s controversial.”

Anyone who has regularly and objectively watched the horrible quarterback play of the Jacksonville Jaguars’ Blake Bortles and Cody Kessler, the Miami Dolphins’ Brock Osweiler, the New York Jets’ Josh McCown and many more can only conclude Kaepernick, based on ability, should have a spot in the league immediately.

But his ongoing lawsuit against the NFL claiming collusion, coupled with his continued advocacy for social justice, will keep him out of the NFL much longer and perhaps permanently.