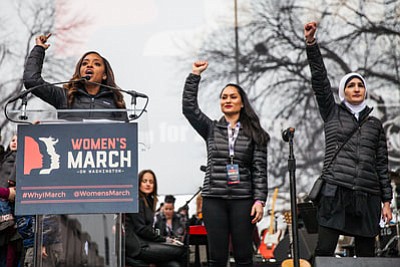 One year ago, the Women’s March (www.WomensMarch.com) descended on Washington, D.C., Jan. 21, the day after Donald Trump’s inauguration to the presidency of the United States.

After eight years of a generally progressive presidency led by Barack Obama, the nation watched as a radical right-leaning administration came to power with promises to “Make America Great Again” by pushing back against women’s rights, health care reform, LGBTQ advances, welfare initiatives and immigration policies.

In response, some 470,000 people came to D.C. to take part in the Women’s March, and there were 32 collaborative sister marches across the globe. This year, Women’s March organizers want to repeat and expand on last year’s efforts—by turning the event into an opportunity to promote voter registration and progressive politicians.

“One year ago the idea of getting women together the day after the inauguration was pretty powerful,” Desiree Peterkin Bell, president and CEO of DPBell & Associates, told the AmNews.

Bell, who is also an activist supporting this year’s Women’s March, emphasized, “Now ‘Souls to the Polls’ is the next step. It’s about political action. ‘Souls to the Polls’ is about, OK, last year we all came together because we were angry, we wanted something to do, we needed to feel inspired and needed to connect our passion with action. Now it’s about that action. So it’s the political action of getting people—and women specifically—to the polls to make an impact the same way we got women to come out [last year] and to express their dismay with what was happening in Washington.”

“Souls to the Polls” and “Power to the Polls” are the slogans being used to launch a national voter registration tour. Women’s March organizers have pushed to have this year’s largest march take place in Nevada, a battleground state whose votes in the 2018 midterm elections could determine what the U.S. Senate will look like.

“The national voter registration tour will target swing states to register new voters, engage impacted communities, harness our collective energy to advocate for policies and candidates that reflect our values and collaborate with our partners to elect more women and progressives candidates to office,” March organizers state on their website, www.WomensMarch.com. “The coordinated campaign will build upon Women’s March’s ongoing work uplifting the voices and campaigns of the nation’s most marginalized communities to create transformative social and political change.”

In addition to a march in Las Vegas, marches and events will again take place across the country and around the world. The Women’s March website lists all the locations for the various gatherings.

Those who can attend the Women’s March will play a part in sending the message that Black women, Latina women, white women, Chicana women, Asian women, Arab women and their organizations can be allies, Bell stated. She noted that besides the Women’s March, there are other planned events, such as the upcoming Feb. 22- Feb. 25, Atlanta-based “Power Rising Summit” (“organized for Black women, by Black women,” http://www.powerrising.org/) that will focus on issues specific to women of African descent.

“Historically there has been a disconnect between traditional feminism and women of color,” Bell said. “You know Susan B. Anthony wasn’t marching for me. We had to create our own opportunities to march for what matters for us. But I think what you’re seeing now is a lot more of our strength and that identity from Black women all across the country who are saying, ‘Yes, I believe in women’s rights, I believe in women’s issues ... but I have a very specific and unique experience in this country that cannot be erased.’”