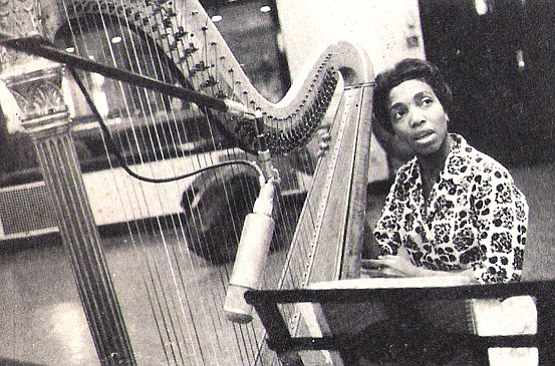 In the world of jazz, harpist Dorothy Ashby had a unique and singular presence. She was a veritable bebop angel on her instrument, and I had the special privilege of coming of age with her in Detroit, and hearing her perform on many occasions.

A graduate of Wayne State University—and we had that in common as well—Ashby began her musical career on piano but was soon hooked on the harp and used that instrument to hook a gaggle of followers.

Born Dorothy Jeanne Thompson Aug. 6, 1930, or 1932, according to one account, she was an early convert to jazz by her father, guitarist Wiley Thompson, who often filled the house with his fellow musicians. These sessions gave young Ashby an opportunity not only to hear the swinging sounds but also to sit in on piano.

As a student at Cass Technical High School, her musical instruction was embellished by such classmates as Donald Byrd, Kenny Burrell and Gerald Wilson. In addition to her prowess on the keyboard, she was also proficient on saxophone and the bass.

When she wasn’t attending classes at Wayne State, where her already considerable musical aptitude was improved, she could be found in the clubs around the city in the early ’50s as a pianist, although gradually switching to the harp.

Despite the naysayers who insisted the harp belonged in the concert/classical realm, Ashby persevered, and apparently quite convincingly when you consider some of the prominent converts she recorded with, including bassist Richard Davis and drummers Roy Haynes, Jimmy Cobb and Art Taylor.

If you missed one of her gigs on the stage or in concert, you could catch her radio show, which was a popular platform for her easy chats and occasional performances. And on these shows, she was usually accompanied by her husband, John, on drums. In 1962, she began accumulating awards when she won the Downbeat magazine critics’ and readers’ honors for best jazz performers. For a host of jazz notables, Ashby was a first-call artist and played with Louis Armstrong, Woody Herman and a number of outstanding bands in Detroit.

With an incurable curiosity and versatility, she and her husband began hosting theatrical productions in which he wrote many of the scripts and she supplied the music. Unfortunately, many of these productions were only minimally recorded and mostly on reel-to-reel tapes by the Ashbys. Even so, they provided a venue for several aspiring actors in the city, including Ernie Hudson, who gained wider acclaim in films and on Broadway.

By the late ’60s, the couple settled in California and except for Ashby’s studio work and working with singer Bill Withers, they were quite content to rest on their considerable laurels. There were also recording dates with top pop singers, none more famous than Stevie Wonder.

Ashby died of cancer April 13, 1986, in Santa Monica, Calif. But her legacy endured as other performers, including the High Llamas, recorded a song entitled “Dorothy Ashby” on their 2007 album “Can Cladders.” Her work has also been sampled by rap artists such Jurassic 5 on their album “Feedback,” as well as Andre Nickalina on his song “Jungle.” Bonobo included the track “Essence of Sapphire” on his mix album “Late Night Tales.” On her own albums, Ashby revealed another facet of her enormous talent, playing the Japanese koto on “The Rubaiyat of Dorothy Ashby.” Perhaps her best recording, and where listeners can really hear her great facility on harp, is “Soft Winds.” And she was also a very competent vocalist.

During an interview with jazz authority W. Royal Stokes in 1983, for his book “Living the Jazz Life,” Ashby commented on her career. “It’s been maybe a triple burden in that not a lot of women are becoming known as jazz players,” she said. “There is also the connection with Black women. The audiences I was trying to reach were not interested in the harp, period—classical or otherwise—and they were certainly not interested in seeing a Black woman playing the harp.”

Now Ashby probably plays where harps are just the thing.