Advocates rally for the homeless 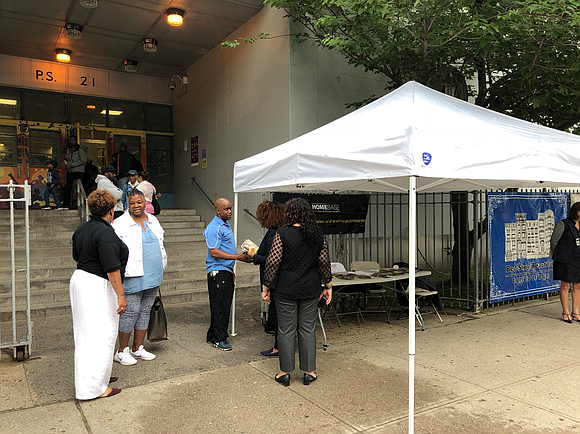 Wednesday, June 13, the Mayor’s Public Engagement Unit, the Department of Social Services, and the Department of Education and Department of Homeless Services Homebase providers hosted a day of action, engaging parents and caregivers at 25 elementary schools across the five boroughs during morning drop-off time to inform them of city services available to families at risk for becoming homeless.

Grace Bonilla, administrator for Human Resources Administration, part of the Department of Social Services, stated that, as far as location, they “look at homelessness rates in different neighborhoods to prevent increased numbers.” Their goals are to “reach out to these different neighborhoods and spread the message about their services,” as well as “to fight income inequality.” Before the day of action, the de Blasio administration looked at attendance rates for data purposes to extend these needed services and resources, helping “at least over 1,000 students.”

With numbers of families with children entering shelters rapidly increasing at the end of the school year, Bonilla believes it comes from families “doubling up” and “living with other family members and friends during the school years to provide consistency for their children and continued comfortability in relationships with teachers who are giving them their education.” When the school year is over, “they may feel like there is no reason to stay in their housing situation,” more than likely being overcrowded.

“We are incredibly committed to prevent homelessness,” said Bonilla. The Homebase program is said to be “the most comprehensive and innovative homelessness prevention services network in the country,” where they help more than 28,000 households annually to remain in their communities and out of shelter programs.

A week before the Day of Action, on June 7, more than 100 children, including many from New York City homeless shelters, joined the Coalition for the Homeless and other advocates in marching to City Hall, using pictures of homes and Lego houses to “demand that the city dedicate 30,000 units of its Housing New York 2.0 plan to homeless households, including 24,000 units created through new construction.”

“In my shelter, I have to walk through metal detectors like I am a criminal,” said Iyana, age 13. “I can’t go to a sleepover at my friend’s house because I have a curfew. The noise is unacceptable, and the smells are intolerable. If the mayor makes more affordable housing, me and my family would be happy.”

“Close down shelters, so we don’t have to feel like we’re in a prison!” said R.J., age 7. “Mr. Mayor, give us affordable housing! If we can build houses, so can you.”

“Of the 300,000 units of housing created or saved by the city’s housing plan, just 5 percent will be set aside for homeless households, a paltry figure considering the depths of the homeless crisis,” said Giselle Routhier, policy director for the Coalition and author of the report. “New York City is set to spend billions on affordable housing over the next decade, but unless more of that housing is targeted to homeless New Yorkers, we won’t see a meaningful reduction in homelessness.”

June 14, Deputy Mayor for Health and Human Services Dr. Herminia Palacio launched the Youth Homelessness Taskforce, a group made up of 15 city agencies and initiatives, 26 nonprofits and 10 youth leaders from the Youth Action Board, in partnership with the NYC Coalition on the Continuum of Care. The taskforce will organize a six-month community process resulting in a strategic plan that will inform the city’s next steps for preventing and ending youth homelessness. The Youth Homelessness Taskforce will also collaborate with the Interagency Homelessness Accountability Council to ensure the purposes of the two groups come together in agreement.

“Giving all young people an opportunity to succeed is our top priority in New York City—and for youth facing homelessness, that means providing dedicated spaces, resources, and programming that will help them stabilize their lives in a safe and supportive environment,” said Department of Social Services Commissioner Steven Banks.

The Youth Homelessness Taskforce builds on a number of significant initiatives taken by the de Blasio administration to prevent and reduce youth homelessness, including the recent NYC Unity Project announcement of “a new $9.5 million investment to prevent and address homelessness for LGBTQ youth across the city.”

The announce continued, “This investment includes funding for the city’s first ever youth shelter for young people up to age 24 and an expansion of hours at the city’s youth drop-in centers.”