2022- The year of the Universal Hip-Hop Museum 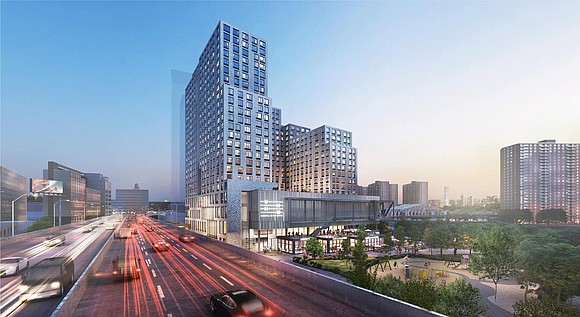 The New York City Universal Hip-hop Museum (UHHM) is slated to open in 2022 in the Bronx. Founded by Rocky Bucano, Kurtis Blow, Shawn LG Thomas, Grandwizzard Theodore, Mickey Bentson, and , Joe Conzo Jr. the museum “celebrates and preserves the history of local and global hip-hop music and culture to inspire, empower, and promote understanding,” according to the UHHM website.

The first two floors of the building will house the museum what the New York City Economic Development Corporation is calling Bronx Point may have some competition.

The new mega-complex along the Harlem-River waterfront and just blocks from the Yankee Stadium, will compete with the Hip-Hop Hall Of Fame in Midtown Manhattan. Founded in 1992 by Hip-Hop Hall of Fame Awards creator and executive producer James ‘JT’ Thompson was launched globally at Sylvia’s, Harlem’s historic restaurant in 1995. This unveiling showcased museum plans, programs, and the BET Cable Network deal for the Hip-Hop Hall of Fame Awards TV Show. Unfortunately the awards show was disrupted when advertisers funding was pulled after the Tupac Shakur murder in 1996, and after The Notorious B.I.G murder in 1997.

The “amazing, awesome, magical, mystical, spiritual, exciting, extravaganza” as the boards Chairman Kurtis Blow said “ is something great for the Board of Education and our young people who just want to take a field trip and learn about hip-hop.”

The museum will begin with offering visitors a “blast to the past” with a submersive experience in ‘70s rap and hip-hop where rap battles, dance-offs, and DJ block parties began.

The museum is asking the public’s help with starting it’s extensive artifact collection. “How would you like to have your work of art, record collection or Hip Hop memorabilia displayed in the official museum of Hip Hop? Is it time to clear out your garage or storage space? Donate your items to the museum and get a tax deduction.” Send email to archivesmgmt@uhhm.org a tweet read from the UHHM Twitter account asking fans to contribute.

“I’m big on technology, so of course we will have all of the artifacts and pictures, but the hands-on is what I’m really keen on as a priority,” said Blow, who was the first solo rapper to be signed to a major label in 1979. Creating as many hands-on experiences as possible with the help of technology the museum will feature “A state of the art performance space with a virtual reality theater for visitors will featuring live shows and a mixed reality experience. “ “Imagine being on stage with @llcoolj performing Rock The Bells. #UniversalHipHopMuseum” a tweet from the UHHM Twitter account.

The Universal Hip-Hop Museum offers college students “Student Ambassador” opportunities to students who have incorporated hip-hop culture into their academics or planned campus or community events dedicated to the advancement of hip-hop culture.

The museums new and updated plans were discussed recently at the New York Music Month Conference at NYU Steinhardt School of Culture, Education, and Human Development. Blow described guest to be “Flabbergasted by all of this history, vast history we have.”