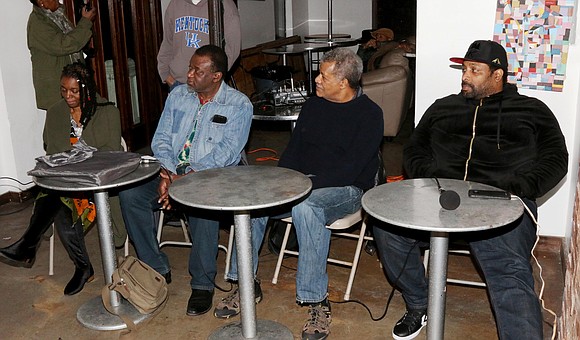 The Jitu Weusi Institute for Development, Education and Activism hosted their Real Black Media versus Fake News panel discussion at For My Sweet, in the affectionately named “People’s Republic of Brooklyn” Monday, Feb. 26. From 7 p.m. to 9 p.m., the panelists discussed the importance of supporting Black media outlets.

“It is important to support and restore Black media outlets. We can identify and trust them to deliver the news without being bias. The word ‘news’ holds a much more ambiguous meaning than it did a generation ago. Tweets are now news. Blogs are news,” event coordinator Marlon Rice explained. “One of the principles of Nguzo Saba, Kujichagulia, states that we define ourselves, name ourselves, create for ourselves and speak for ourselves. Black media represents our self-determination, the ability to speak for ourselves. And it should be supported as a trusted source for the news that concerns us.”

“It was a pleasure to attend!” said Solomon Francis, a sophomore at the New York Institute of Technology. “Black media and the steps that need to be taken in order for it to become more prominent in our communities. They talked about the importance of choosing Black-owned sources of media over mainstream counterparts. One of the panelists even linked how it affects the Black economy and Black people all over the world. It was really an eye-opener! Overall, I felt the unity in the room and was impressed by the information that was shared.”

This event was co-sponsored by Good People NYC and Black Veterans for Social Justice.