Gov. Cuomo visits NYCHA while Mayor de Blasio is out of town 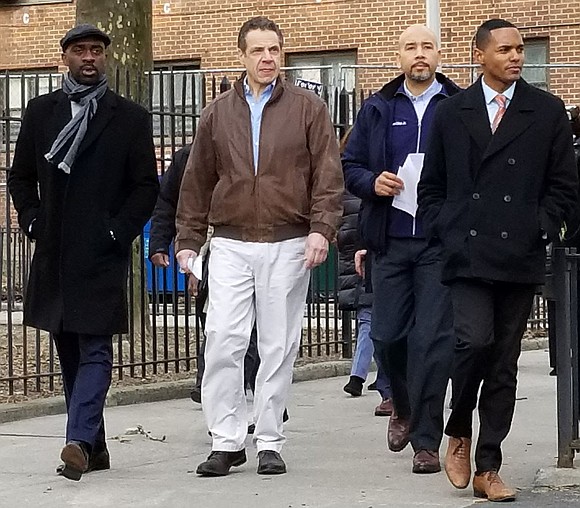 Gov. Cuomo is now stepping into the ongoing saga of issues facing NYCHA and calling on the state health department to investigate health and safety condition in public housing in the city.

Monday, Cuomo toured Andrew Jackson Houses in the Mott Haven section of the Bronx. Along with other NYCHA properties across the city, residents of Jackson Houses have had to deal with a backlog of repairs and issues with heating and water.

Officials from Cuomo’s office said he observed hazardous conditions such as mold, vermin and potential lead paint, all posing a serious public health threat. Among the disturbing conditions Cuomo witnessed was the apartment of a disabled man in a wheelchair, whose family, including a 14-month-old boy, endures mold, roaches and lack of heat and hot water.

Cuomo was invited to visit Jackson Houses by Walden last week to meet with tenants to see firsthand what they are dealing with. 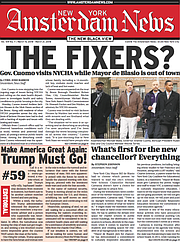 “The situation we’ve seen is as upsetting and as disturbing as anything I’ve seen anywhere and I’ve been through the worst housing complexes all across this country,” Cuomo said. “It is just shocking that in New York State we would have people who are subjected to these conditions, and on behalf of the people of the state, I apologize to the NYCHA residents because they deserve better and they’ll get better.”

Cuomo unveiled a plan for a tenant-led oversight council for NYCHA to be negotiated in the state budget. The council will oversee how funding is spent and how repairs are being conducted at NYCHA. It would include NYCHA’s tenant board members and members of the Citywide Council of Presidents, but would serve as an independent oversight body.

Although the state does not have legal or financial responsibility to NYCHA, Cuomo said his office made $300 million available to NYCHA given the “city’s neglect.” The state has funded $100 million previously and recently dedicated another $200 million.

This week, the State Assembly also passed legislation that would enable NYCHA to use an alternative procurement process in order to streamline renovations and rehabilitations, including the replacement of outdated boilers and heating systems.

“While the conditions at NYCHA are because of decades of insufficient funding, respect and inefficiency from all levels of government, our fellow New Yorkers don’t deserve excuses and apathy, rather demand execution and action,” Blake said. This situation is a life or death emergency. It requires funding, management changes and a shift of focus and priorities.”

Cuomo made the tour of the Bronx public housing complex while Mayor de Blasio was at the South by Southwest festival in Austin, Texas. In a statement regarding Cuomo’s visit and that passage of the Assembly’s legislation, de Blasio placed NYCHA’s problems on the state for not stepping in sooner.

“The rest of Albany needs to follow the Assembly’s lead: stop playing games and promoting gimmicks,” de Blasio said. “Deliver the key investments and reforms NYCHA tenants are waiting for.”