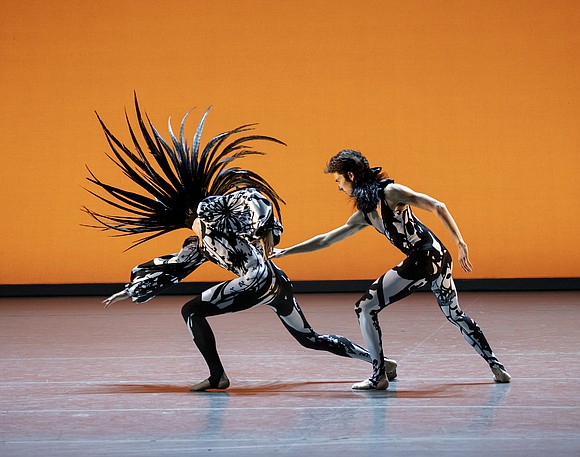 Before the curtain rose for the New York City Ballet’s annual Choreography & Couture fall gala, the dancers were announced, and in warmup clothes, gala outfits and, curiously, a T-shirt that read “Libre” (“Free”), a full stage of dancers flanked Teresa Reichlen, who delivered a statement written by her and Adrian Danchig-Waring (both principals) concerning the continued spotlight on the company surrounding misconduct and sexual harassment.

In deep black or red, Neenan’s linear “The Exchange” opened, followed by the very young Reisen’s (19 years old) flowy and poetic “Judah.” By far, the evening’s success was from Abraham, the only African-American to create a work for the company in more than a decade, and, for Abraham, a first for a ballet company. With dancers dressed in Deacon’s varying versions of bold, black and white prints, fancy neck ruffles and exaggerated head dresses, Abraham’s “The Runaway” closed the program to a raucous standing ovation.

First, to Nico Muhly’s “Quiet Music” on piano, Taylor Stanley begins with a slow and deliberate solo packed with Abraham’s signature rippling limbs and cantilevered balances. Then, he darts from here to there and floats through the air, really close or far away from the audience, always leaving a trail. Later, Stanley returns in silhouette and a direct spot, with another ball-buster solo, this time to recorded music by Kanye West, and his long limbs take on sharp lines but with the same subtle finishes. In between, when the others join, they bring Abraham’s mix of classical and contemporary (the nay-nay, a wink to Nicki Minaj or the Hottentot Venus’ exaggerated buttocks) to life. And to keep up with Abraham’s speed and clarity, the women are quick en pointe. Ashley Bouder, Sara Mearns and Georgina Pazcoquin champion Abraham’s dive into contemporary ballet, while Jonathan Fahoury, Roman Meiha, Sebastian Villarini-Velez and Peter Walker hold their own, rounding out this new venture for Abraham.

Despite NYCB’s indifference to seating and recognizing this representative from the AmNews, bringing attention to Abraham and his work is essential.